For more than a century, a political organization known as the Tammany Society ruled New York City politics with an iron fist. Founded in 1786 (and named for Tamanend, a chief in the Lenni-Lenape nation), by the mid 19th century it rapidly expanded its political control by earning the loyalty of the city’s fast-growing immigrant population, particularly the Irish.

The Tammany Society proved an efficient machine for controlling state Democratic politics as well as New York City elections. Through its use of patronage to reward loyal precinct leaders, it also became a center for big-time graft. Most of us know a bit about Tammany thanks to school history books that focused on the deep corruption of William “Boss” Tweed, who was brought down by the press and by Harper’s Weekly cartoonist Thomas Nast in the 1870s. Tammany Hall would survive the scandal, and in the 1920s would still pull the strings of politicians including Gov. Al Smith and New York City Mayor Jimmy Walker.

Tammany had several homes, but during its most notorious years it was located in a circa 1812 hall (then called a “wigwam”) and later in an 1868 building on 14th Street, between Third and Fourth avenues. The July 13, 1929 “Talk of the Town” noted the recent demolition of that old hall and the opening of a new headquarters on 17th Street:

“Talk” found the new building unimpressive; it seemed to signal that the old political machine was losing some of its luster:

Indeed, “Talk” found the building to be a somewhat austere, hosed-down affair, far removed from its grander past:

For further evidence that the more austere Tammany Hall was nevertheless alive and well in 1929, another “Talk” item noted the organization’s continued influence behind the scenes in local politics:

The 1930s marked the beginning of the end for Tammany Hall, when reform-minded Democrats such as President Franklin Roosevelt and New York’s Republican Mayor Fiorello La Guardia (supported by Roosevelt on a “Fusion” ticket) dismantled Tammany’s system of patronage. The Tammany Society abandoned its headquarters in 1943 when it found it no longer had the funds to maintain the hall. Bought by a local affiliate of the International Ladies Garment Workers Union, it later housed the New York Film Academy and the Union Square Theatre until 2016, when it underwent extensive remodeling to make way for new office and retail space.

Your Two Cents Worth

“Talk” also commented on the introduction of a new two-cent stamp that featured an image of Thomas Edison’s Mazda lamp, marking the celebration of 50 years of electric light. The magazine cheekily suggested that in the world of technological progress, there was nothing new under the sun: 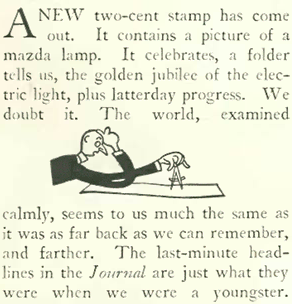 The New Yorker featured this humorous bit by a writer identified as “Guido” (I assume it is one of E.B. White’s many pseudonyms), who looked in on the chatter of various Parisian cafés and bars:

The New Yorker generally reveled in the good times Florenz Ziegfeld brought to the stage, but his latest effort, Show Girl, proved a bit of a disappointment (more evidence, in my view, that folks were tiring of the decade-long party known as the Roaring Twenties):

One of a Kind

New Yorker sportswriter Niven Busch, Jr. provided a nice write-up on golfer Bobby Jones, the most successful amateur ever to compete in the sport. An attorney by trade, the unassuming Jones had just won his third U.S. Open (he would win again in 1930). In all he would play in 31 majors, winning 13 of them and finishing in the top 10 an incredible 27 times. After retiring at age 28 in 1930 he helped design the Augusta National Golf Club and co-founded the Masters Tournament. An excerpt:

Looking around the July 13 issue, let’s see what nighttime diversions were being touted by the New Yorker in their “Going on About Town” section (note the warning on the last item): 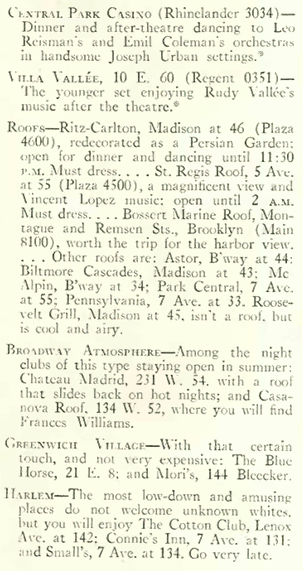 The makers of Pond’s cold cream continued to roll out endorsements from high society with this testimonial from Jane Kendall Mason (1909-1980), the newlywed wife of George Grant Mason, an executive with Pan American Airways in Cuba.

In 1925, the 17-year-old Jane made her formal debut in Washington society. After a visit with Grace Goodhue Coolidge, the first lady famously declared that Jane was “the most beautiful girl ever to enter the White House.” 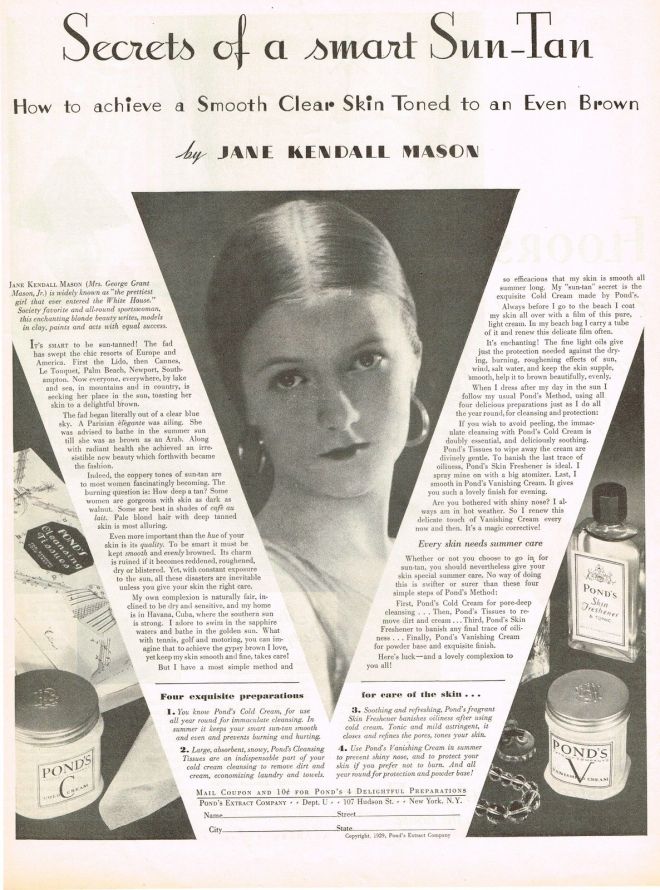 After their marriage, the Masons became friends with Ernest and Pauline Hemingway, and introduced the Hemingways into Cuban society. Jane could hunt, fish, and hold her liquor, and, according to Ernest Hemingway, she was the most uninhibited person he’d ever met. So naturally they had a torrid, tempestuous, two-month affair that ended with Jane’s attempted suicide (she leapt from a balcony that was not high enough to do the job).

Hemingway supposedly used Jane as a model for the cruel-hearted Margot Macomber in The Short, Happy Life of Francis Macomber, in which the title character—trapped in a sad marriage to a wealthy but spineless American (George?)—accidently shoots her husband in the head while on safari. She is also considered to be the model for the sex-obsessed Helene Bradley in Hemingway’s novel To Have and Have Not— a character also married to a rich but spineless husband.

Mark Walston, writing for the July-August issue of Bethesda Magazine, notes that the mean-spirited Hemingway “sent Jane drafts of his work, taunting and tormenting her with his venomous and thinly veiled portraits.” According to Walston, Jane divorced Mason in 1940, and one month later married John Hamilton, former executive director of the Republican National Committee. After that brief marriage she wed George Abell, columnist for The Baltimore Sun and Washington Times-Herald. Her fourth and final husband was Arnold Gingrich, founder of Esquire and editor of Coronet magazines. Jane died in 1980. On her tombstone is her self-penned epitaph: “Talents too many, not enough of any.”
On to our next ad, which featured an interesting exchange between two men who discuss the fortunes of a guy named Cecil Barnes, retired at age 33 and owner of a new personal airplane…

…and we segue into our cartoons, featuring a mother and child (drawn by Kindl) probably flying on one of those Sikorskys…

…a note on Kirby, a three-time Pulitzer winner: outraged by the passage of Prohibition laws, Kirby created one of his most famous characters, “Mr. Dry,” which he introduced to readers of the New York World in January 1920…

You can read more about Rollin Kirby and Mr. Dry here.

…Roland Baum peeked in on a reluctant stargazer…

…and to close, this little filler drawing of a hot dog vendor by Constantin Alajalov…

Next Time: On the Flatfoot Beat…