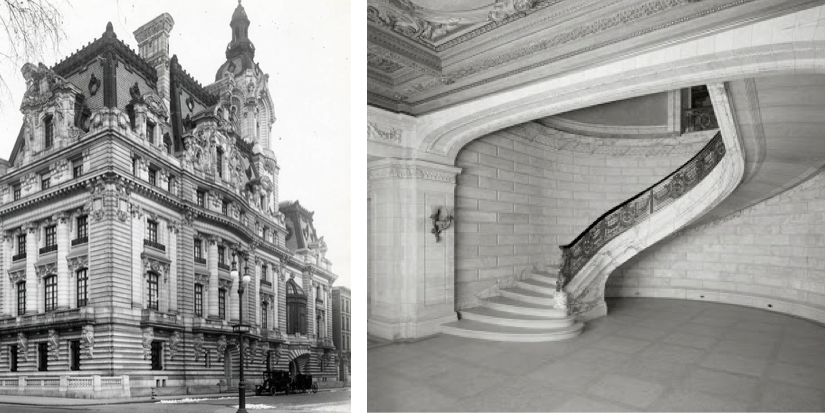 The breathtaking changes along Manhattan’s streets and across its skyline in 1927 were reflected in the New Yorker’s frequent accounts of venerable landmarks giving way to new skyscrapers.

We’ll skip ahead for a moment to the March 5 issue in which the “Talk of the Town” editors reflected on the upcoming demolition of the William A. Clark house on Fifth Avenue and 77th Street, just 16 years after its completion in 1911. The editors noted that the empty house received many curious visitors in its last days, including the silent film star Charlie Chaplin: 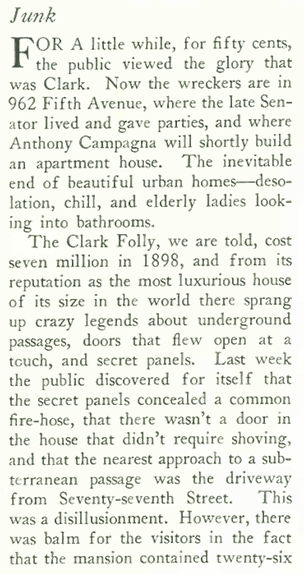 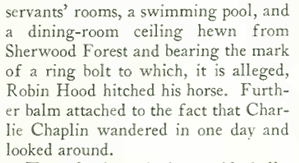 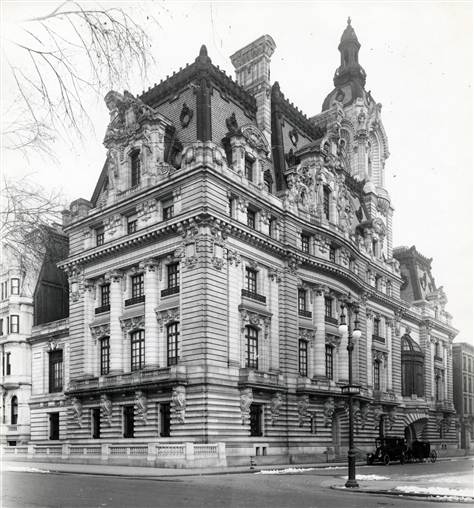 According to Wikipedia, the second floor featured a 36-foot-high rotunda, used as the statuary room. This opened onto a conservatory of solid brass and glass, 30 ft. high and 22 ft. wide. Across the rotunda was the marble-paneled main picture gallery that was 95 ft. long and two stories high. An organ loft housed the largest chamber organ in America.

The nine-story house contained 121 rooms, 31 bathrooms, four art galleries, a swimming pool and Turkish baths. High-tech for its times, with electricity and central air conditioning, it required seven tons of coal per day, brought in by a private subway line.

After Clark died in 1925, his daughter, Huguette, and her mother, Anna, moved to 907 Fifth Avenue and the mansion was sold to developer Anthony Compagana for $3 million (more than $40 million today). Compagana had it torn down, replacing it with a luxury apartment building.

A footnote: Clark’s daughter and heiress, Huguette, would go on to own a $24 million Connecticut country estate and a $100 million estate in Santa Barbara, but would keep them uninhabited. Briefly married from 1928 to 1930, she became reclusive, holed up in her apartments at 907 Fifth Avenue until she moved to a series of hospital rooms beginning in the 1980s.

Huguette died at age 104 in 2011. You can read more about her strange and fascinating life in Bill Dedman’s Empty Mansions: The Mysterious Life of Huguette Clark and the Spending of a Great American Fortune.

Continuing the theme of the changing skyline, the Feb. 26 New Yorker featured this advertisement for the new Drake Hotel at Park Avenue and 56th Street: 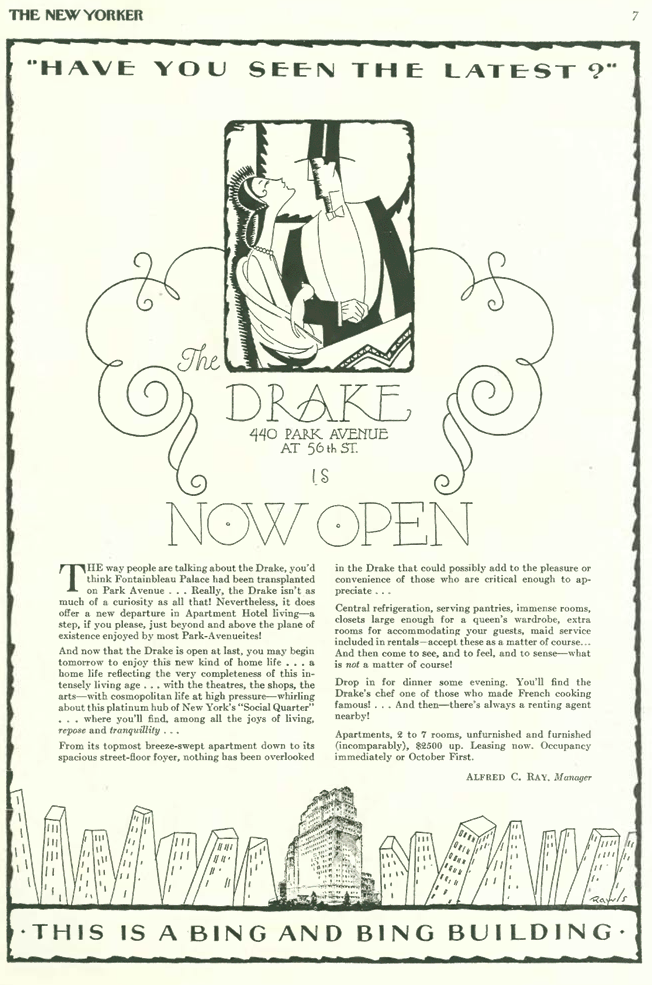 The hotel was built in 1926 by the real estate organization of Bing and Bing, 21 stories with 495 rooms. Like Clark’s Folly, it was innovative for its time, with automatic refrigeration and spacious rooms and suites.

It saw plenty of famous guests, from silent star Lillian Gish (she lived there for three years) to ’60s and ’70s rock bands like Led Zeppelin and The Who.

Completed in 2015, the supertall 432 Park was designed for the superrich. The building has been maligned by many who find it not only ugly but also a stark representation of the city’s increasing cost of living and conspicuous displays of wealth. One blogger suggested that the building was giving the city “the finger.”

Even Fortune magazine’s Joshua Brown (“Meet the house that inequality built: 432 Park Avenue,” Nov. 24, 2014) noted “in a building so tall and imposing, with over 400,000 square feet of usable interior space, there are only 104 units for people to live in. 432 Park Avenue is, in short, a monument to the epic rise of the global super-wealthy. It is the house that historic inequality built.”

After reading about 432 Park, it seems appropriate that I spotted this advertisement in the New Yorker’s March 5, 1927 issue:

Fritz Lang’s film Metropolis was set in a futuristic urban dystopia where the upper classes lived high above the toiling masses. Hmmm.

Next Time: World of Tomorrow… 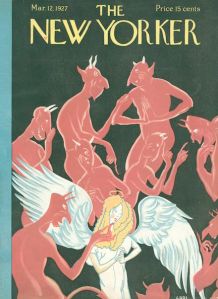 The New Yorker celebrated its 2nd anniversary by once again using the Rea Irvin cover from its first issue, which depicted a dandified character–soon to be dubbed “Eustace Tilley”–that would become a mascot of sorts for the magazine.

For more than 90 years it has been a tradition to feature the original cover every year on the issue closest to the anniversary date of February 21, although on several occasions a newly drawn variation has been substituted, including several “alternative” covers for last year’s 90th anniversary issue. This one in particular, by Carter Goodrich, is appropriate for our times: 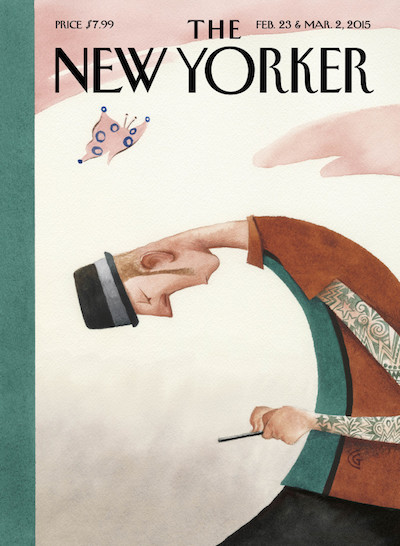 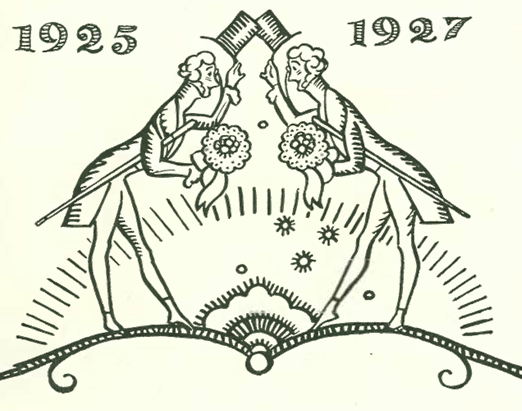 …and the editors opened with a somewhat tongue-in-cheek boast of the young magazine’s improving fortunes: 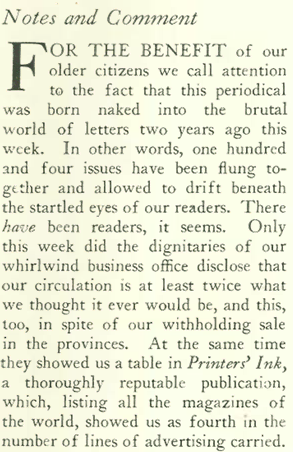 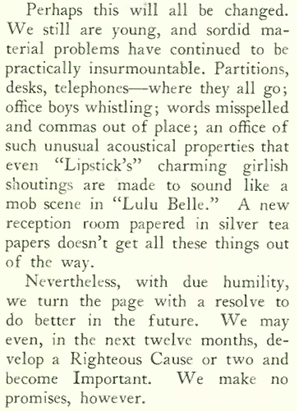 The boasts about advertising were legitimate. Apparently the people at Rolls Royce felt that the magazine was worth a full-page, weekly advertisement. Note the third paragraph of the ad, third to to the last line: How many car makers today, or any at time for that matter, would tout that their car “meets every traveling situation blandly?” 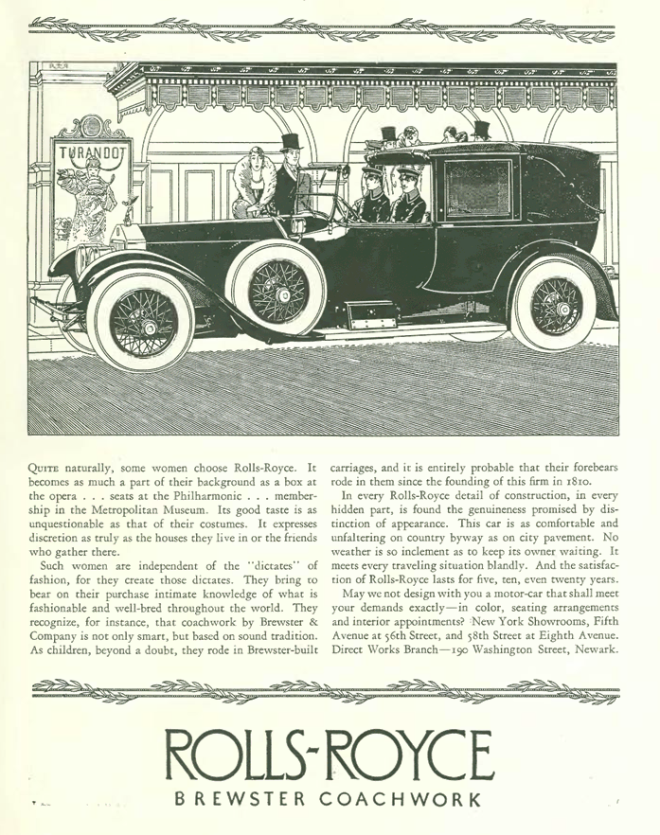 While on the topic of ads, this one from the back pages caught my eye:

Most of us have heard of vaudeville teams like the Marx Brothers and Laurel & Hardy, but there were many others who drew big audiences but are mostly forgotten today, including the trio of Clayton, Jackson and Durante.

Of the three, Jimmy Durante would go on to the greatest fame. Known for his gravelly voice, clever wordplay and his prominent nose (which he dubbed “the Schnozzola”), Durante would find great success in radio, film, and in early television. The singer, pianist and comedian would appear on many variety shows in the 1950s and 60s. Although he died in 1980, today he is still known to audiences young and old alike thanks to his appearance as the narrator in the animated Frosty the Snowman (1969), which is still broadcast every year during the Christmas season and is distributed through countless tapes and DVDs.

On to more advertising, and less savory topic. Beginning in the 1920s, Lysol was advertised for use in feminine hygiene as a guard against “odors,” a term that was widely understood as a euphemism for contraception. According to Andrea Tone (Devices and Desires) by 1940 it had become the most popular birth control method in the country. Unfortunately for many women, Lysol contained cresol (derived from coal tar) which could cause severe inflammation and even death:

Also popular (and a lot less harmful) in the 1920s was sheet music featuring the latest songs. So sidle up to the piano with your guy or gal and belt out one of these favorites:

And to close, a cartoon by the famed Peter Arno, who was well-acquained with New York nightlife: 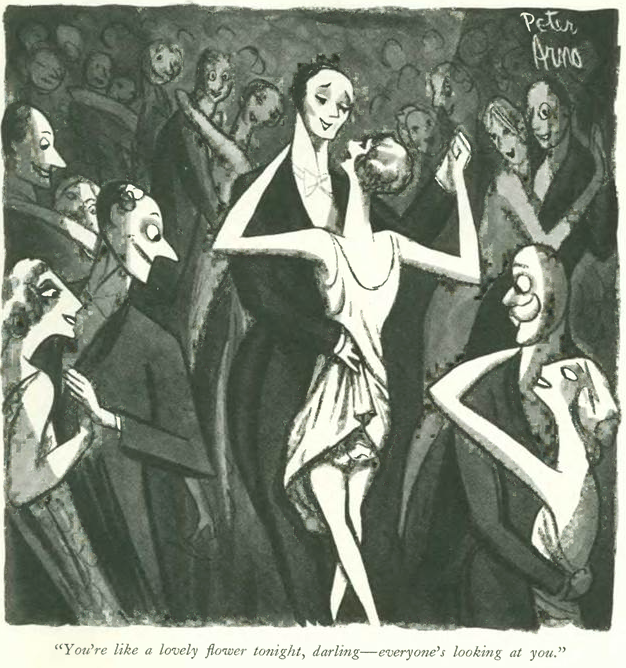 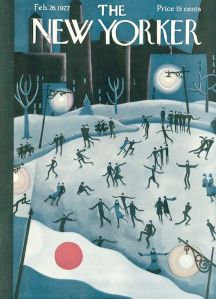 Ernest Hemingway wrote his lone New Yorker piece for the Feb. 5, 1927 issue. Titled “My Own Life,” it was a short parody of the 3-volume My Life and Loves by Irish writer Frank Harris.

Writing for The Hemingway Review (Fall 2001), Francis Bosha notes in “The Harold Ross Files” that Hemingway’s sole contribution to the New Yorker is striking given that the magazine was such a major influence on fiction in the 20th century.

Money, or the shortage thereof, appears to be the main reason why Hemingway was not a regular contributor. Although the young magazine was doing well, Bosha writes that it was not yet ready to compete financially with more established mass market magazines. Indeed, Hemingway’s “My Own Life” landed in the New Yorker because it had already been rejected by both Scribner’s magazine and The New Republic.

If you read the piece you can see why it was rejected. The famed fiction writer, hot off the success of The Sun Also Rises, was not a great parodist. An excerpt:

And so on. Hemingway wisely stuck with serious fiction, which might explain his fleeting  association with the New Yorker, which in its first years was bent toward humor in the Punch vein and not toward serious writing.

Nevertheless, the New Yorker’s founding editor, Harold Ross, maintained a friendship and a regular correspondence with Hemingway during the writer’s years in Cuba in the 1940s. On several occasions Ross invited Hemingway to submit something to the magazine, but nothing came of it. It didn’t help that Hemingway publicly stated in 1942 that he “was out of business as a writer,” and was suffering from depression, weight gain, and bouts of heavy drinking.

“The Talk of the Town” reported the premiere of Florenz Ziegfeld’s new art deco theatre was “one of the big mob scenes of the season,” attracting celebrities and celebrity-gawkers alike: 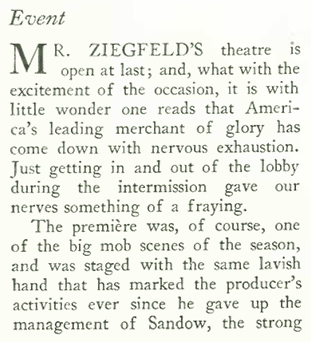 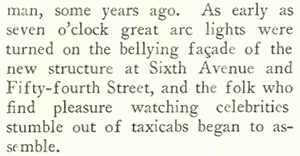 The opening drew the likes of Charlie Chaplin and polar explorer Roald Amundsen, who perhaps found a line of chorus girls a welcome sight after years of trekking through frozen landscapes. 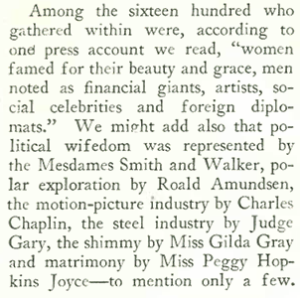 Among the attractions of the new theatre was what was claimed to be the largest oil painting in the world: 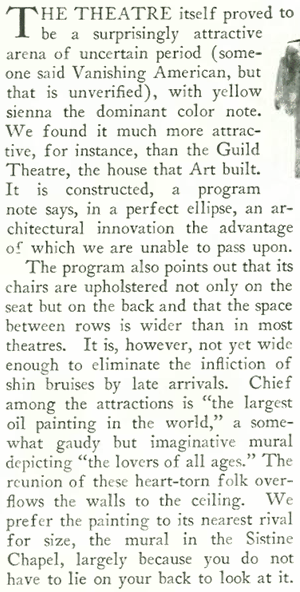 Sadly, despite public protests, the theatre was razed in 1966, bulldozed into rubble. The Burlington House stands on the site today:

But we will end on a happier note, a cartoon by Barbara Shermund: 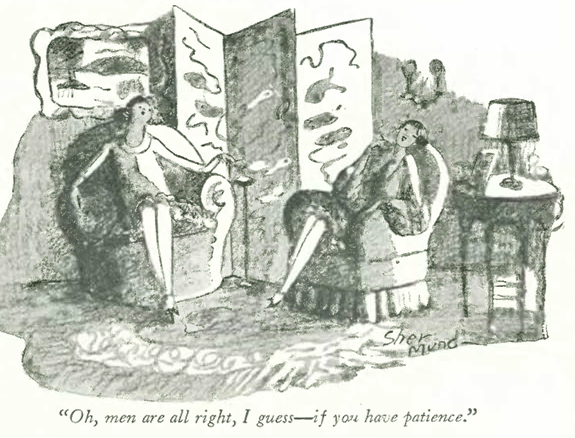 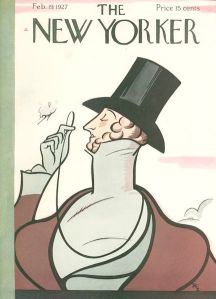 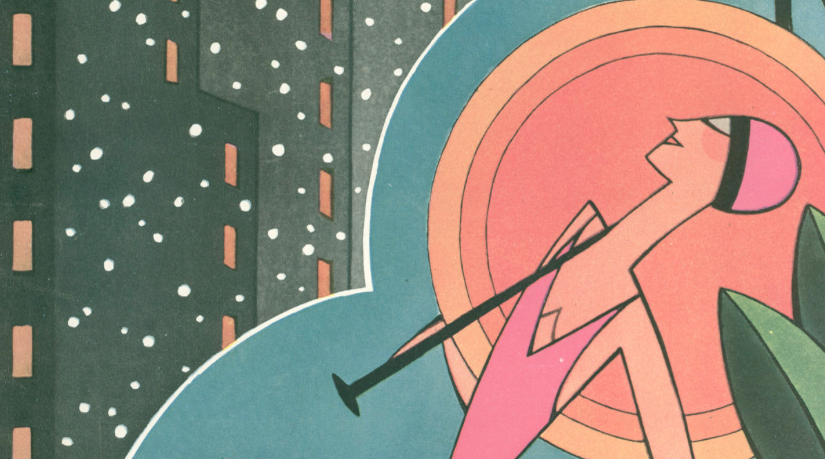 Piles of snow and slushy streets had many New Yorkers dreaming of spring, including H.O. Hoffman, who illustrated the cover for the Feb. 5, 1927 issue.

Another New Yorker illustrator, Barbara Shermund, offered a different take on the idea in this drawing for the “On and Off the Avenue” column on page 56: 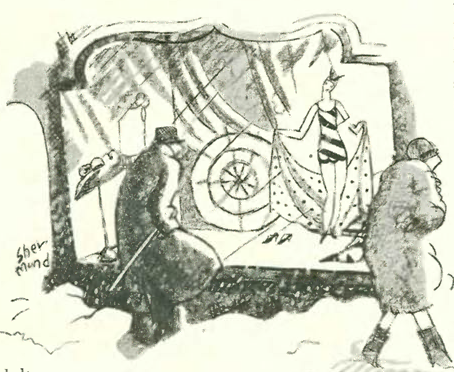 At least New Yorkers had plenty of activities to take their minds off of the weather, including two important balls:

Inspired by the annual springtime costume ball given by the students of the École nationale supérieure des Beaux-Arts in Paris, American students held an annual ball to raise funds for their Beaux-Arts Institute of Design. The balls featured elaborate costumes and performances that were extensively reported in the city’s society pages.

Contrary to the ad pictured below, fashion plate Margaret Thaw was doubtless smarter than her ankles… 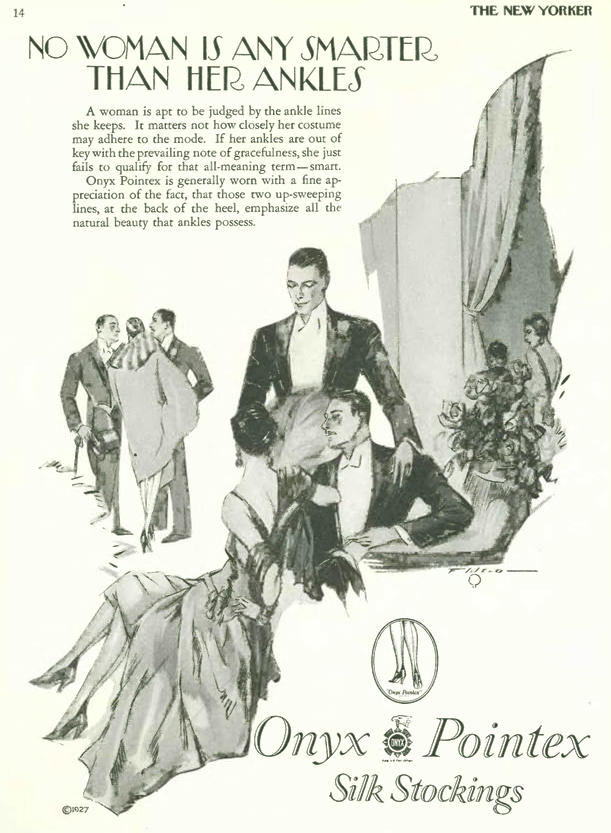 If were investing in fine Onyx Pointex silk stockings, you probably wanted to get your legs “Zipped” in a new method described by fashion correspondent Lois Long: 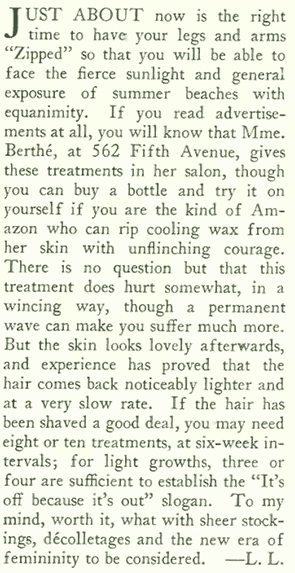 If Lois Long were around today she would have to note that both men and women are getting “Zipped,” waxing everything including their nether regions.

And these days few of us are washing our hair with bar soap, as depicted in the ad below for Lux soap. Like so many other ads in the early New Yorker, this one makes a strong appeal to Francophile readers; if it’s French then it must be good (note that every paragraph and headline in the ad mentions either France or French at least once): 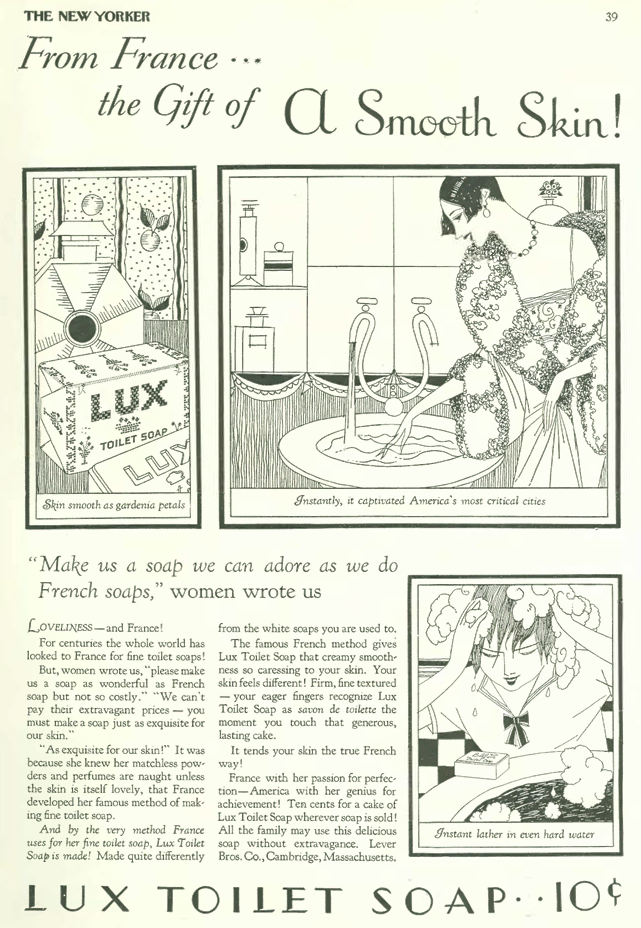 While we are on the topic of advertisements, here is another installment of ads from the back pages of the magazine. Arthur Murray was a frequent advertiser in the magazine, mostly small ads like this that exploited the latest dance craze: 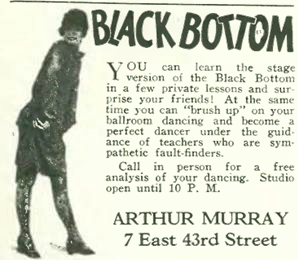 The offerings of the stage and screen were also prominent in the back pages:

And finally, these strange little ads (run as series) that were designed by photographers Anton Bruehl and Ralph Steiner to promote Weber and Heilbroner suits:

Next Time: Papa Pens a Parody… 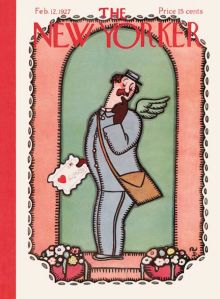