The New Yorker kicked off the summer season with a trip down to Coney Island. Writing for “The Talk of the Town,” editor Harold Ross took in the various sights and amusements at the famed Steeplechase and Luna parks.

Attractions at Steeplechase Park included everything from racing wooden horses to a “human billiard table.” Less jolly diversions included air jets that blew up  women’s skirts and clowns who administered electric shocks to unsuspecting visitors (one more reason to fear them). And there was at least one racist game of skill…

Over at Luna Park there were more air holes to blow up women’s skirts and assorted freak shows. More wholesome entertainments included the famed Cyclone rollercoaster, which celebrated its 90th year of operation in 2017.

Writing for the June 23 “Talk of the Town,” Murdock Pemberton anticipated the construction of a new theatre to be developed by famed Austrian director/producer Max Reinhardt and designed by Austrian-American architect, illustrator and scenic designer Joseph Urban: 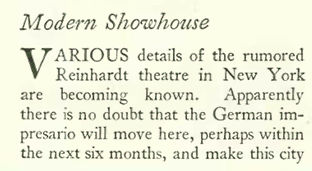 Unfortunately the market crash of 1929 put an end to the project, which would have looked like this had it been constructed:

Urban designed innovative sets for clients ranging from the Metropolitan Opera to the Ziegfeld Follies (he also designed a theatre for Ziegfeld in 1927, see below). Although he is noted as one of the originators of American Art Deco, most of his architectural work in the United States has been demolished.

The New Yorker continued to struggle with the emergence of “talking pictures.” The critic “O.C.” found that the sound dialogue in The Lion and the Mouse did little to improve the picture:

The critic seemed to believe that sound pictures would take some time to catch on. Little did he know that Warner Brothers would announce later that summer (August 1928) that all of its films for the 1928-29 fiscal year would have sound. United Artists would make the same announcement in November 1928. In February 1929 Twentieth-Century Fox would make its final silent movie, and Columbia would release its last silent movie on April 1, 1929.

The New Yorker still found happiness at the movies through the likes of actress Colleen Moore, who made a sweet little film called Happiness Ahead.

Colleen Moore was one of the most famous stars of the silent era who popularized the bobbed haircut and flapper style. Personally, I’ve always considered Moore to be a more wholesome version of the flapper, in contrast to the more worldly Louise Brooks, another flapper icon of the Twenties.

Continuing our series on celebrity endorsements of Old Gold cigarettes, none other than the Little Tramp stepped up to take the blindfold test (along with a pile of cash, no doubt):

And if Old Gold is not to your taste, then why not enjoy the “toasted” pleasures of Lucky Strike? Actress Betty Compson found them indispensable when preparing for a big scene: And now for something that caught my eye in the June 23 issue…a bit of filler art that broke up some copy on page 34:

This particular illustration was also featured in one of the New Yorker’s earliest issues—March 21, 1925—in a two-part comic panel (below). I am puzzled why the New Yorker, flush with artistic talent by 1928, reused this illustration. Perhaps the layout editors figured since the readership was so small in March 1925, no one would notice. 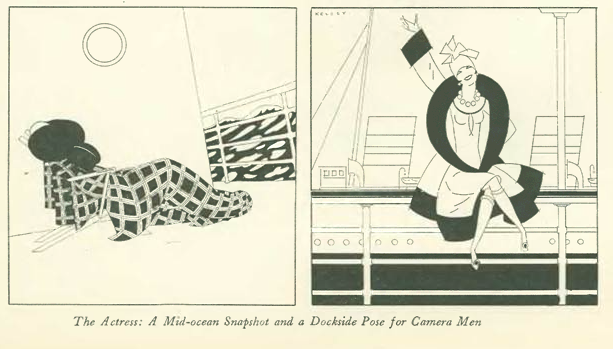 And we leave with yet another look at some Jazz Age shenanigans, courtesy cartoonist Peter Arno:

Compared to Hollywood, cinema as an art form in the 1920s was more advanced in Europe, where filmmakers took a more mature, nuanced approach to movies; they focused less on money and more on exploring difficult social and historical issues. Trench warfare, genocide and famine have a way of doing that to you.

The contrast between the European avant-garde and Hollywood’s Tinseltown was not lost on the New Yorker’s film critics, who consistently lambasted American cinema while applauding nearly everything coming out of Europe, and especially the films produced by German and Russian directors. The critic “O.C.” used the Russians latest American release, The End of St. Petersburg, to drive home the point. He also chided those who dismissed the film as propaganda, a stance much in line with leftist intellectuals of the day who found inspiration in the Russian Revolution (and sometimes they looked the other way when things didn’t go so well in the Soviet experiment—1928 marked the beginning of the Soviet Union’s first Five-Year Plan. By 1934 it was estimated that almost 15 million people died from forced collectivization and famine).

The End of St. Petersburg was blatant propaganda, to be sure, but to this day it has been widely praised for its cinematic innovations. The story itself was fairly straightforward: A peasant goes to St. Petersburg looking for work, gets arrested for his involvement in a labor union and is subsequently sent to fight in the trenches of World War I. His experiences in the war solidify his commitment to revolution and the overthrow of the capitalist overlords. The New Yorker review:

The New Yorker reviewer suggested that a story used primarily to influence an audience—propaganda—was not necessarily a bad thing: 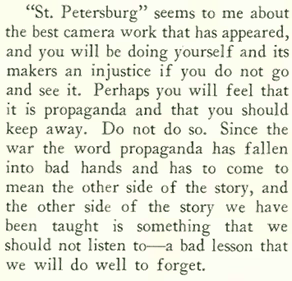 Back in the New World, most of the talk in cinematic circles revolved around the excitement of “talking pictures.” 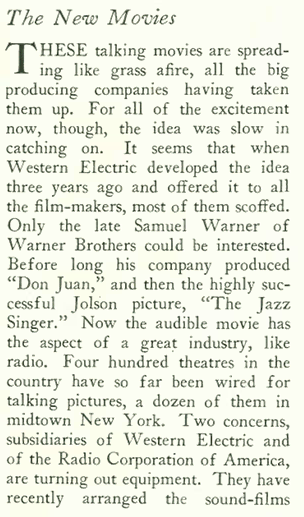 It seems that Fox Movietone newsreels really got things going with sound and whetted the audience appetites for more:

Then There Was The Other Playwright…

Mae West, to be exact. My guess is her approach to the craft was a bit different than G.B. Shaw’s, and we can gather as much from these excerpts from the June 9 “Talk of the Town.” The piece discusses West’s rise to fame as the creator and star of the scandalous play Sex, and her unorthodox approach to rehearsals. 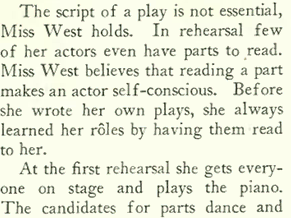 Although many today would identify D.H. Lawrence as one of great English novelists of the 20th century, eighty years ago the New Yorker book critic Dorothy Parker described him as “very near to being first rate.” 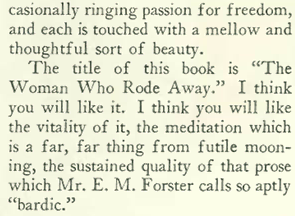 The makers of Old Gold cigarettes claimed to have scientific proof on their side with a series of ads in the New Yorker featuring endorsements by the rich and famous. This ad ran in the June 9 issue: 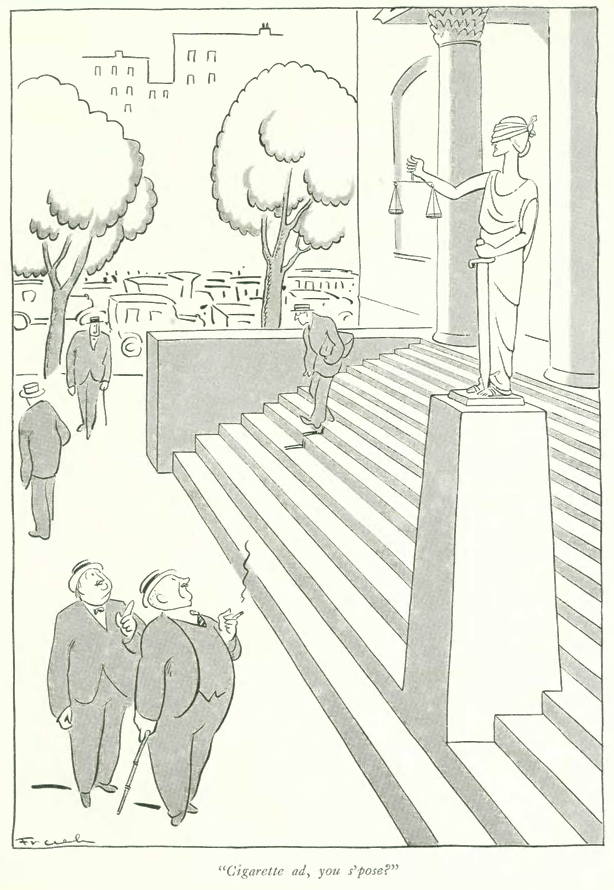 …and Peter Arno offered this unique take on human vanity…

Talking pictures continued to be a theme in the June 16, 1928, issue of the New Yorker.

In his “Of All Things Column,” Howard Brubaker suggested that sound movies would spell the end of careers for some silent stars:

Although some actors struggled with the transition to sound, the reasons why some major stars faded with the advent of “talkies” are far more nuanced. In many cases, some stars packed it in because their careers had already peaked during the silent era, and both studios and audiences were looking for some fresh faces.

Niven Busch, Jr. continued to explore the illicit bar scene in his recurring feature “Speakeasy Nights.” I include this excerpt because it described a rather clever facade devised by the owner of the “J.P. Speakeasy.”

Busch observed an interesting protocol for admittance into the speakeasy, including a typewritten message devised to throw off any would-be Prohibition officers:

This ad leaves a bad taste in your mouth no matter how you look at. Nothing like coating your mouth with Milk of Magnesia before lighting up that first fag of the day…

…and here we have another ad for Flit insecticide, courtesy of Theodore “Dr. Seuss” Geisel.

Next Time: Down to Coney Island…