Although architectural criticism was practiced by a rare few in 1926 (and even fewer today), it was prominent in the pages of The New Yorker. Lewis Mumford famously served as the magazine’s critic from the 1930s to the 1950s, and longtime critic Paul Goldberger took over the magazine’s “Sky Line” column from the mid-90s to 2011.

In the Oct. 16, 1926 issue, Chappell took critical aim at the “cheap architecture” sprouting amidst the clamor of a rapidly changing landscape…

…and referred to the fenestration (the arrangement of windows and doors) of the Murray Hill Building as “atrocious.” 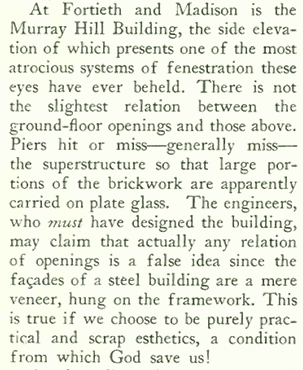 Chappell then set his sights on “another disappointment,” the Delmonico Building, which he said possessed “the grace of an overgrown grain elevator…” 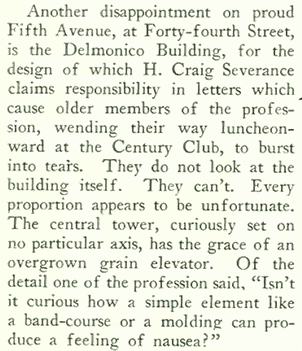 So what did Chappell prefer? Read on…

Despite Chappell’s oft disapproving gaze, in the end he (along with other editors and writers at The New Yorker) could not help but be caught up in the thrill of one of the city’s grandest building booms… 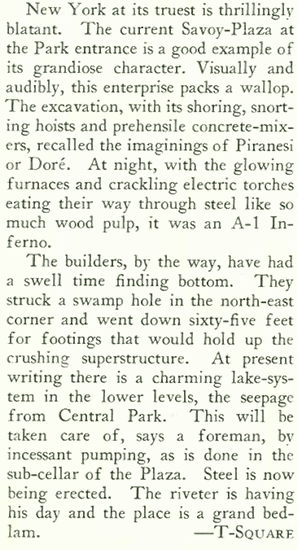 Other items of note in the Oct. 16 issue, this ad promoting the first-ever “New Yorker book,” a collection of “Profiles” by Waldo Frank, who wrote under the pen name “Search-light”…

And finally this picturesque ad for Marmon automobiles. The company was defunct by 1933. 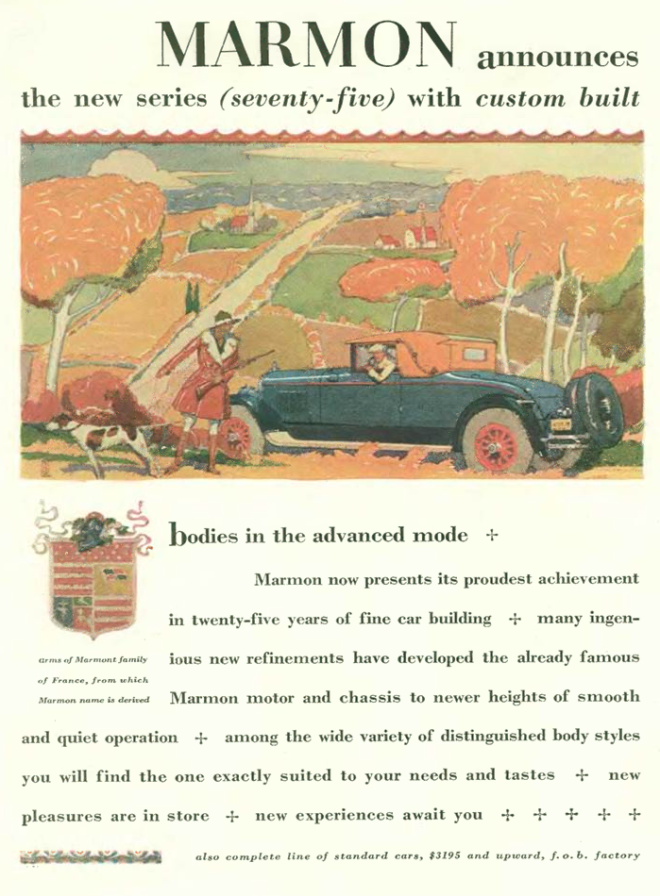 Next time: A Royal Flush…

The antics of Polish actress Pola Negri were once again in The New Yorker’s spotlight in the May 16, 1925 issue. In the early issues of magazine, Negri was among the most watched celebrities including Gloria Swanson and Charlie Chaplin.

Negri’s latest activities were recounted in a “Talk of the Town” segment that began with an account of the English tenor John Coates. Upon his arrival in the U.S., it was reported that Coates “frankly noted upon his Customs’ declaration possession of two quarts of truly excellent Scotch; quite a different procedure from that followed by Pola Negri who has found it necessary, since inspectors discovered some alcoholic beverages among her baggage to (1) fail to remember their presence, (2) attribute ownership to her maid, and (3) recall that there were mild wines for medicinal use only.”

“Talk” continued with a report on Negri’s recent behavior in Paris, where “Madame, the Countess” created a traffic jam when she demanded that her driver stop to serve her “a golden drink in a beautiful goblet,” and later at the Ritz-Carlton “she engaged for herself an entire floor.” When informed that singer/actress Nora Bayes “and her latest husband” already occupied two rooms on the floor, Negri replied that they would understand that “she could not possibly live in less than an entire floor.” Then Negri herself knocked on Bayes’ door and asked the couple to move off the floor. It was not reported if they complied, but the magazine did note that “after the clinch there was a grand and most friendly party that evening.”

“Talk” also commented on “The Craze for Royalty” with the observation that “No social set feels satisfied with its activities these democratic days unless it is entertaining, has entertained, or is planning to entertain royalty. There were rumors that “Even that secluded section of our native aristocracy which is descended wholly from Colonial governors, and which hitherto has treated mere kings and princes with formal politeness proper for acknowledging the presence of inferiors, has succumbed to the craze” with a “discreet inquiry as to whether Wilhelmina, Queen of the Netherlands, would accept an invitation to visit New York in 1926.”

The royal visit was sought in conjunction with a planned celebration by the descendants of the original “New Netherlanders” of that “famous real estate deal three hundred years ago, when Manhattan Island was purchased from the Indians for some rum and a few trinkets.”

“Talk” noted previous visits by royalty, such as the “kidnapping” of the King and Queen of Belgium by the “Social Old Guard,” or the “Knickerbocker dowagers” observing “the strange preferences of His Royal Highness, the Prince of Wales,” during his visit the previous year. “Talk” also referred to the upcoming visit by “Her Majesty of Rumania” and her “shrewd plans for a matrimonial alliance.”

The magazine also made note of an illustration in the previous issue – a self-portrait by the famous American portrait painter George Luks, who as a joke signed his drawing “Gene Tunney.” The champion boxer was reportedly a friend of Luks.

“Talk” reported that the actor John Barrymore was back from a London season of Hamlet and was once again contemplating a movie role. It was noted that he was wearing “Le Valentino medal,” an award given him for best screen acting of the year (I’m not sure if “Le Valentino” was a real award or some joke about Rudolph Valentino, but it is worth noting that the first Academy Awards ceremony was still four years into the future). Among those traveling abroad were playwright Marc Connelly, New York Times publisher Adolph Ochs, and “Mr. Asa Yoelson,” who “booked passage as Al Jolson.” The violinist Jascha Heifitz became an American citizen, “Squire Heywood Broun” was “enjoying a nervous breakdown,” and cartoonist Jay Darling (known as “Ding”) was “convalescing under sunny Iowan skies.”

In a feature titled “A Mob and a Machine,” novelist and social critic Waldo Frank (writing under the pen name “Searchlight”) penned a sour account of an opening day baseball game at the Polo Grounds between the New York Giants and the Boston Braves.

Frank wrote of the “abyss” that separated the game “from the vast crowds that watch it” and the specialized play of the game where “Batsman and fielder mechanically carry out motions whose plan and purpose are established for them.”

That is why, observed Frank, that Babe Ruth…

…ignoble, fat fellow that he is—deserves his vogue…It is such as he who enable the wistful mob to have some sort of contact with the game. For baseball is only clockwork; but the Bab is a boy—moody, clever, tangible and human…The Babe’s home run is an effort on the part of the machine to connect with the crowd. When the ball reaches the bleachers, contact is established.

Frank wrote that after the game is ended, “we can pack ourselves like grains of sand into a stifled elevated train, and read in the headlines of the paper we have just bought, what a significant national event we have just witnessed.”

Lamenting the loss of the “old-fashioned, humble game,” Frank wrote that like everything else in America “the Game’s gotten bigger—and that means better…It used to be a enjoyable means of moving our bodies. Not any more. Now, there’s a machine that does the moving, while our forty thousand bodies sit packed and rancid in the grandstands.”

“The Theatre” section reported that Oscar Hammerstein (later to become half of the famed Rodgers and Hammerstein Broadway musical juggernaut) had engaged “two girls” for a performance at his Victoria Theatre. The “girls,” who had been arrested, tried and acquitted of shooting a W.E. Stokes in the ankle, were identified as Ethel Conrad and Lillian Graham. Their subsequent notoriety led to their hiring by Hammerstein for a singing act that The New Yorker described as “a terrible frost;” the duo reportedly left the stage after their debut performance “without a ripple of applause from the audience.” The girls’ act was arranged by Loney Haskell, who after the performance asked the opinion of song writer Jim Thornton. Thornton replied: “By golly, they’ll have to shoot a couple of men to get in next week.”

“Profiles” featured Max Steuer, a famed American trial attorney, while the “Music” section mentioned Paul Robeson’s “recital of negro spirituals” at the Greenwich Village Theatre, noting that “there are few artists who can equal him in getting inside a song and becoming part of it.”

“Of All Things” reports that “the Babeless New York” was in sixth place in the American League and “hobnobbing with such shady characters as Boston and Detroit. The Yanks are slumming.”