A decidedly new sound reverberated in the ears of New Yorkers who attended a Feb. 1928 performance of the New York Philharmonic that featured guest artist Leon Theremin, a Russian inventor who played music by moving his hands through the air, or more accurately, a magnetic field.

Theremin’s eponymous instrument had neither keys nor strings, but rather two metal antennas attached to an electronic oscillator. Music was produced by moving one’s hands between the antennas, which sensed the relative position of the players hands—one antenna controlled for pitch while the other adjusted the instrument’s volume. The sound produced is best described as “otherworldly.” James Thurber, writing for the New Yorker’s “Talk of the Town” (in a piece titled “Music Makers”), found Theremin’s performance intriguing, but of even greater interest was the great Russian pianist and composer Sergei Rachmaninoff—who was in attendance—and his reaction to the strange instrument: 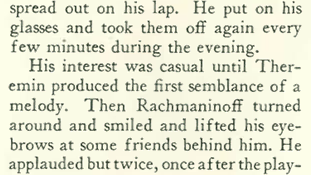 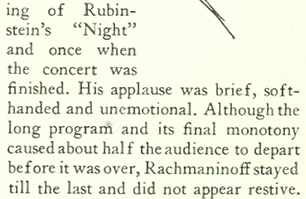 The New Yorker’s voyeuristic account of Rachmaninoff continued, with the great man now becoming more engaged in the performance…

The Theremin would grow in popularity, however more as a novelty than a serious instrument:

Theremin would be granted a U.S. patent for the instrument in 1928, which was marketed and distributed in the U.S. by RCA during the 1930’s in either DIY kit form or as a finished instrument:

Robert Moog, pioneer of modern electronic music and inventor of the Moog synthesizer, made and sold a transistorized version of the Theremin in the 1950s.

The Theremin would become best known to mass culture through its use in producing “eerie” sound effects in 1940s and 50s films, including Bernard Herrmann’s use of the instrument for the soundtrack to the 1951 sci-fi thriller, The Day The Earth Stood Still. And nearly everyone on the planet has heard the Theremin-inspired sound of the Beach Boy’s song Good Vibrations, created by an electro-Theremin that was developed in the late 1950s to mimic the sound of the original Theremin.

As for Leon Theremin himself, he would also gain notoriety as the inventor of The Thing, a listening device most famously used by the Soviets to bug the U.S. Embassy in Moscow. The device was hidden behind a wood carving of the U.S. Great Seal, which in 1945 was presented by Soviet schoolchildren to the U.S. ambassador, who subsequently hung it in his office.

The reasons why Theremin developed The Thing for the KGB are a mystery. When he suddenly disappeared from New York in 1938 it was rumored that he had been kidnapped and possibly executed by the KGB. What we do know is that Soviet spooks put him to work in a secret laboratory in the Gulag camp system, where he developed The Thing.

In 1991, filmmaker Steven Martin brought Leon Theremin back to New York to film a documentary about his life. Theremin gave one last performance in 1993, and died that year at age 97.

The New Yorker’s review of the hit film Simba showed a very different approach to the natural world 89 years ago, when the wilds of Africa were exploited purely for adventure and thrills rather than for any real understanding of natural systems and the animals and humans that inhabited them. Martin and Osa Johnson were celebrated for their filmed exploits in the wilds, including Simba; they touted their movie—shot in Kenya—as being made under the auspices of the American Museum of Natural History, although much of the film was staged or edited in ways to maximize the thrills.

The New Yorker found the film to be “darn good fun”… 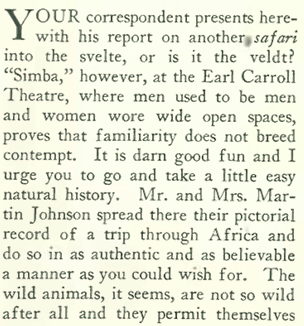 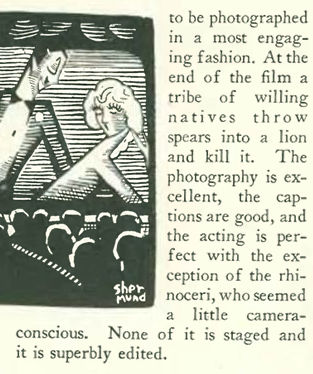 Despite its flaws, the film does offer us a glimpse of Africa when wildlife hadn’t been hunted to near extinction, although the Johnsons didn’t hesitate to gun down animals left and right in the course of their movie-making.

According to a 2011 review from Wild Film History, “in stark contrast to the conservation-themed wildlife films of today, the Johnsons approached their subjects armed with both camera and rifle, with the production including provoked behaviour, staged confrontations and animals shot to death on film. Relying heavily on cutting in kills from professional marksmen, numerous hunting scenes culminate in a heart-stopping sequence where, with the use of clever editing, the adventurous Mrs Johnson appears to bring down a charging rhinoceros with one well-aimed shot.

From the Advertising Department

There were three automobile ads in the Feb. 4 issue, all from long-gone companies—Pierce-Arrow, Hudson-Essex, and Nash, which featured this endorsement by the brother-sister dancing duo Fred and Adele Astaire: 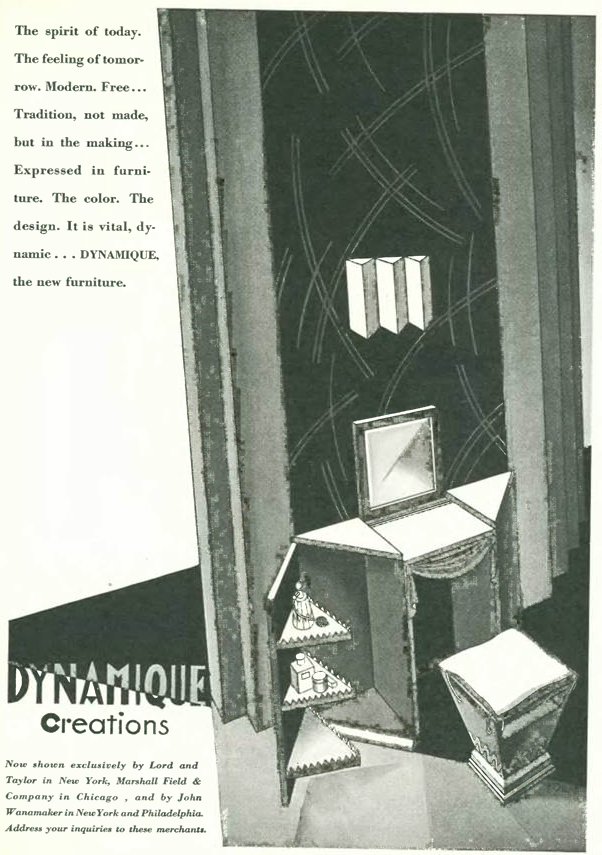 And finally, a Peter Arno cartoon of an upper class faux pas… 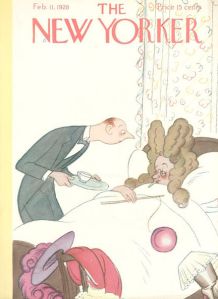