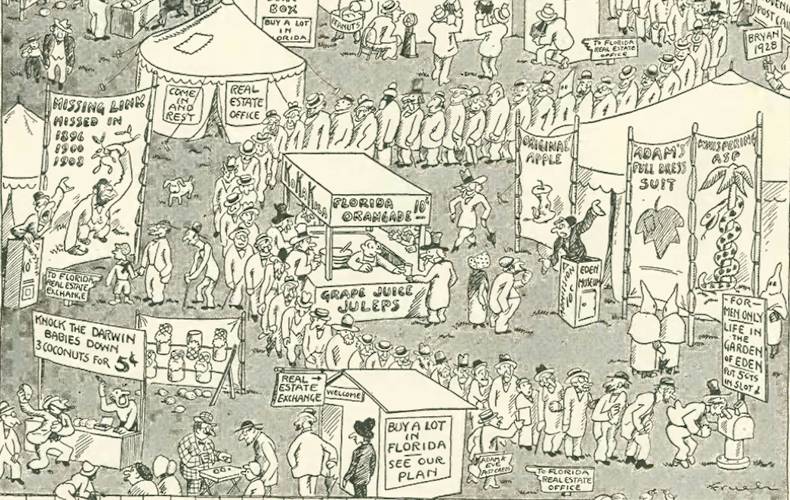 In its 21st issue (July 11, 1925) The New Yorker was back to taking swipes at William Jennings Bryan and the backward ways of Tennesseans as the Scopes “Monkey Trial” drew near.

A four-page feature penned by Marquis James (the longest article to appear in The New Yorker since Issue #1), primarily focused on the trial’s setting—Dayton, Tennessee—and the habits and tastes of its countrified citizens:

Prosecutor and famed orator William Jennings Bryan had not yet arrived in Dayton, but the townsfolk were plenty enamored of the other star in their midst, attorney for the defense Clarence Darrow. James reported that the agnostic Darrow mixed surprisingly well with the locals:

James concluded his piece with a description of the carnival atmosphere that gripped the tiny, formerly unknown town that was now the focus of the entire country:

An illustration by Al Frueh that preceded James’s article makes hay of the “carnival atmosphere,” likening it to a modern-day version of the Inquisition:

“The Talk of the Town” did its usual breezy wrap up of “The Week” (including the announcement of the birth of Charlie Chaplin’s son (by Lita Grey), and offered a somber note about the dampening effects of Prohibition on the restaurant trade. It also noted that David Belasco had marked 50 years in the theater business (though his influence was waning), and “Texas” Guinan personally opened the door of her nightclub to opera great Mary Garden after a bit of a misunderstanding:

The film was also “in color,” actually a cross between two-color technicolor and hand-coloring, sometimes using only one process or the other, sometimes both. According to IMDB:

Parts of the film were hand colored using the Pathécolor stencil process, in which groundstone glass is cut with a pantograph in the shape of an object to conform with what is on the 35mm print. A machine then passes a dye-soaked strip of velvet over the film with the glass stencil on top and the film is colored. Cutting the stencils (a stencil for every different color) was a very long and tedious process which delayed the release of the film by almost two years. The color style/scheme of the movie was to imitate the tone, color and feel of 17th Century Renaissance paintings.

In the review of another film, Paths to Paradise, the critic (TS) wrote that “Mr. Raymond Griffith establishes himself as a genuine comedian of the rank of Menjou and Chaplin.”

The “Sports” section of these early issues of The New Yorker covered mostly polo, tennis, golf and yacht races and regattas, which I will explore more in future posts.

In the section “When Nights Are Bold,” Charles Baskerville (signing as “Top Hat”) reviewed the tango dance performance by Fay Marbe at the Beaux Arts Restaurant: “She is easy on the eyes; and after her performance we were all patting her on the back, because it’s one of the most beautiful ones we have ever beheld.”

And now for the funnies: On the inside front cover, the musings of English cartoonist W. Heath Robinson, best known for his drawings of ridiculously complicated machines for achieving simple objectives:

And finally, this three-act performance by staff artist Johan Bull. In her book Defining New Yorker Humor, Judith Yaross Lee writes that Bull was a Norwegian immigrant who started out as a caricaturist for the sports department, but was pressed into greater service for his ability to mimic Rea Irvin’s style:

Up next time. More monkey business in Issue #22: