In a previous post I briefly looked at the Algonquin Round Table–writers, critics, artists, some of them New Yorker contributors–who had been exchanging witticisms over lunch at the Algonquin Hotel since 1919.

Like so many things connected to The New Yorker, Alexander Woollcott was at the center of the famed table’s origin story. According to Wikipedia, the group that would become the Round Table began meeting as the result of a practical joke carried out by theatrical press agent John Peter Toohey, who was annoyed at Woollcott (a New York Times drama critic) for refusing to plug one of his clients (Eugene O’Neill) in his column. Toohey organized a luncheon supposedly to welcome Woollcott back from World War I, where he had been a correspondent for Stars and Stripes (and where Woollcott first met Harold Ross and Jane Grant). Instead Toohey used the occasion to poke fun at Woollcott on a number of fronts, including his long-winded war stories. Woollcott’s enjoyment of the joke and the success of the event prompted Toohey to suggest that the group meet every day at the Algonquin for lunch.

An illustrated feature by Ralph Barton in the August 29, 1925 issue (titled “The Enquiring Reporter”) thumbs its nose at critics of the Round Table who accused its members of “logrolling” (exchanging favorable plugs of one another’s works). Barton’s feature spoofs the man-on-the-street interviews that were popular in the 1920s. The persons chosen “at random” are none other than members of the Algonquin Round Table who take turns denying that any logrolling takes place at the famed gathering:

In fact, there was quite a bit of logrolling taking place in this “Vicious Circle.” As Thomas Kunkel writes in Genius in Disguise, in addition to New Yorker contributors, the Algonquin Round Table variously included representatives of the New York Times, the New York Tribune, Vanity Fair, Harpers Bazaar and Life.

Kunkel also observes, “By far the most powerful transmitter of Round Table wit was (Franklin) Adams (known to most as F.P.A.), whose column in the Tribune (and later the World), “The Conning Tower,” was scoured by tens of thousands of New Yorkers for its dollops of quippery and clever verse. Young writers conspired to break into the column, and the appearance of even a four-line snippet was regarded as a triumph…the Round Table supplied F.P.A. with a freshet of material, and he wasn’t bashful about using it. A particularly good line from Parker or Kaufman or Benchley might turn up in “The Conning Tower” within hours of its utterance.”

In other happenings, “The Talk of the Town” noted that the last meal served at Delmonico’s–which was fated for the wrecking ball–was less a cause for mourning and more one of scorn for the bad taste of the site’s owners: 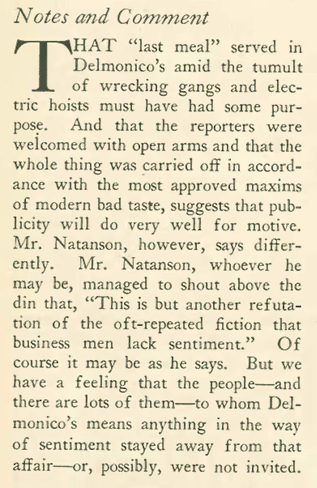 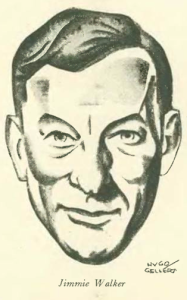 Among other items, O.H.P. Garrett penned a “Profile” about flamboyant mayoral candidate Jimmie Walker that seemed to anticipate the raucous career that would follow after his election.

Garrett observed that “his life is constructed of minutes and seconds. He can be clocked with a stop watch,” and that Walker’s main concerns seemed to be Sunday baseball, boxing and the repeal of movie censorship.

Lois Long seemed a bit bored with the week’s diversions in her column, “When Nights Are Bold,” but did welcome the reappearance of Texas Guinan after yet another club was threatened with padlocks by the Prohibition Authority:

On the advertising front, the back inside cover and back cover were graced with paid advertising. As with most ads in The New Yorker, the target audience had some money to spend on travel:

And we end with these weekend scenes from the magazine’s center spread, drawn by Helen Hokinson: 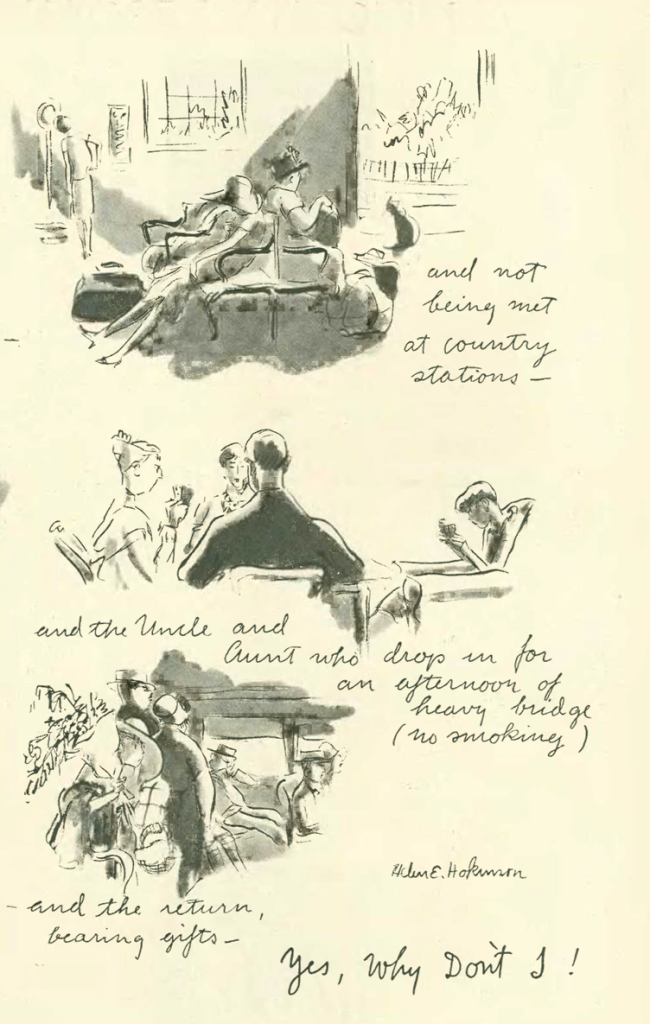 Next time, tennis anyone?