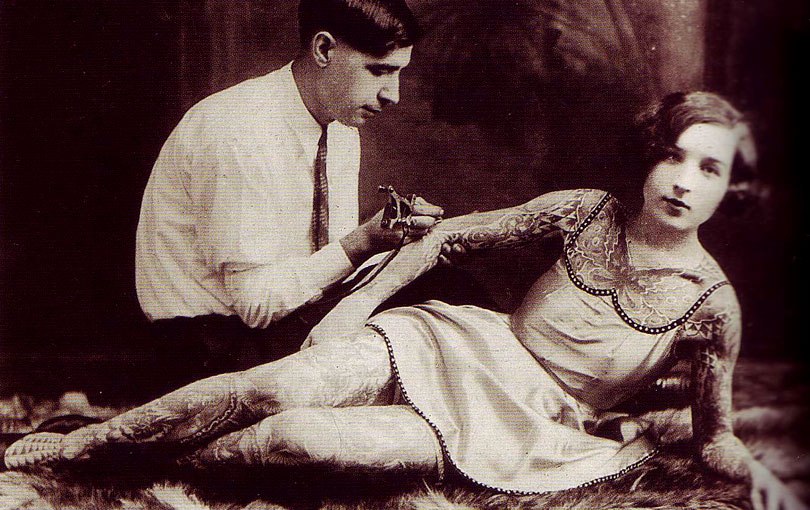 Coney Island was famous for its side-show freak exhibits, but from 1925 to 1969 Hubert’s Dime Museum and Flea Circus in Times Square brought the show to the heart of Manhattan.

In addition to sword swallowers, tattooed ladies and other human oddities (the famous Zip the Pinhead did a short stint there), there was also Professor Heckler’s Flea Circus, which operated in the basement. It indeed featured real fleas attached by very thin wires to miniature chariots, merry-go-rounds and the like.

The New Yorker mentioned Hubert’s in this brief “Talk of the Town” item: 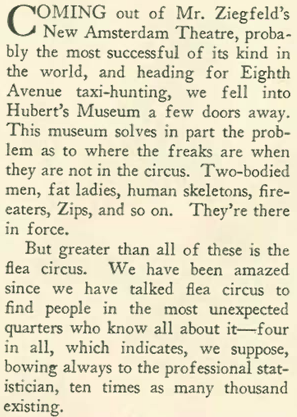 These days it seems a bit strange that women covered in tattoos were once considered sideshow oddities. Among the more famous was Stella Grassman, who worked as a “Tattooed Lady” in the late 1920’s in the Ringling Bros. Barnum & Bailey Circus and also appeared at Hubert’s. Stella and her husband, Deafy (pictured below) owned a tattoo shop on the Bowery.

And then there was Professor Heckler’s Flea Circus, depicted below (the “fleas” enlarged 700 times, and obviously embellished) in a feature on Prof. Heckler in the March 1930 issue of Modern Mechanics:

The entrance to Hubert’s, photo undated, but probably from the early 1950’s:

Profiles examined the life and work of playwright Eugene O’Neil, and in the “Critique” section Gilbert W. Gabriel (who sometimes wrote under the pseudonym Golly-Wogg) gave a strong review of O’Neill’s The Great God Brown, writing that the play represented “some of the finest writing of his lifetime.”

I should note here that Gabriel had replaced Herman J. Mankiewicz as drama critic following HJM’s firing by editor Harold Ross in January of 1926. Ross, miffed by Mankiewicz’s interest in Hollywood, famously fired “Mank” by telegram (Mankiewicz would go on to a successful career as a screenwriter on such films as Citizen Kane and The Wizard of Oz).

Finally, an interesting take in “Talk of the Town” on book censorship of the day:

Hard to believe that many of these books were considered lurid in their day, and were much sought after. Now you can buy practically anything, but then again, so few people read anymore these days.

“Talk” ended with this helpful advice on current cocktail recipes (remember we are in the midst of Prohibition). The “Titantic,” with six parts gin, seems deadly indeed: 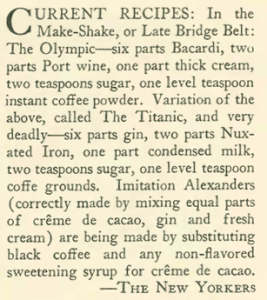 What is “Nuxated Iron” you ask? It was sold as a performing enhancing iron supplement in the early 20th century, endorsed by such athletes as boxer Jack Dempsey and baseball’s Ty Cobb. The blog Peterboriana explains it thus:

“Nuxated Iron” pills, as endorsed by Dempsey, were, obviously, iron supplements.  As for the “nuxated” part of it, that refers to nux vomica, a deadly substance better known as strychnine (i.e. rat poison).  Fortunately, the stuff being hawked…actually contained very little strychnine, and not much iron either.  It was comparatively useless as a performance-enhancing drug, but would not kill you unless you took a lot of it.

So if the Titanic’s six parts gin don’t get you first, maybe the Nuxated Iron will.

Next Time: Stop and Go 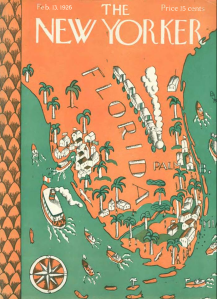