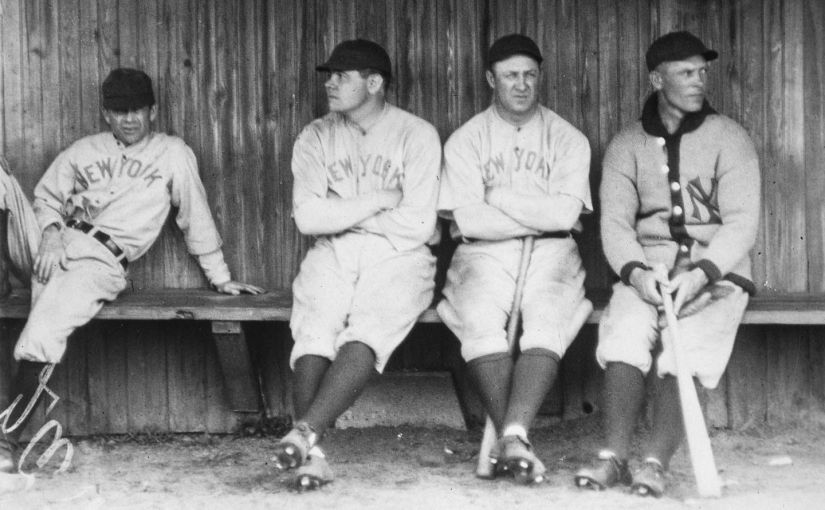 In the early years of the New Yorker, baseball as a sport was almost entirely ignored by the magazine, which otherwise gave exhaustive coverage to polo, yacht racing, tennis, and golf. There were also articles on badminton, rowing, and even auto racing, and college football received a lot of enthusiastic ink. But none for baseball. With the Sept. 22, 1928 issue I think I finally understand why.

It has to do with the New Yorker’s parochial view of the world, so aptly illustrated by Saul Steinberg on the magazine’s March 29, 1976 cover, in which anything beyond the Hudson was essentially terra incognita:

A lot of New York Yankee fans came from “out there,” according to James Thurber in a “Talk of the Town” segment titled “Peanuts and Crackerjack.” Thurber wrote of his experience at a pennant race game between the Yankees and the Philadelphia A’s. The game of baseball was described as something for the out-of-towners who were “a bit mad,” a mass spectacle in which the game itself was of minor importance. In short, it wasn’t cool to be a Yankees fan if you counted yourself among Manhattan’s smart set:

This “Talk” item was written when the Yankees were on the verge of winning their second consecutive World Series championship over the favored St. Louis Cardinals. The 1928 team featured the famed “Murderer’s Row” lineup with the likes of Babe Ruth and Lou Gehrig. In all, nine players from the ’28 team would be elected to the Hall of Fame, a major league record. But as of the Sept. 22 issue neither the 1927 or ’28 Yankees merited a line in the New Yorker’s sports pages.

Thurber wrote that one could learn much about those in attendance at the game by the way they received Yankee star Babe Ruth:

Thurber proved his point about out-of-towners by noting the origin of license plates in the “army of parked cars” outside of the stadium. He also noted the appearance in the game of an ancient Ty Cobb, who hit a weak fly ball while a few old-time fans looked on in reverence:

The Sept. 22 issue A.H. Shaw profiled “De Medici in Merion” Dr. Albert Barnes, who made his fortune by developing in 1901 (with German chemist Hermann Hille) a silver nitrate-based antiseptic marketed as Argyrol. In the days before antibiotics, Argyrol was used to treat eye infections and prevent newborn infant blindness caused by gonorrhea. The profile featured this rather fearsome illustration by Hugo Gellert: 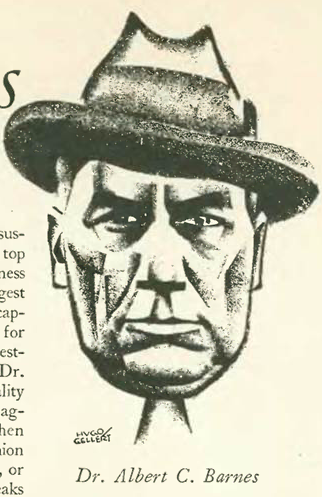 The lengthy piece detailed Barnes’ coming of age, and how his promotion of Argyrol helped bankroll his famed art collection. A brief excerpt: 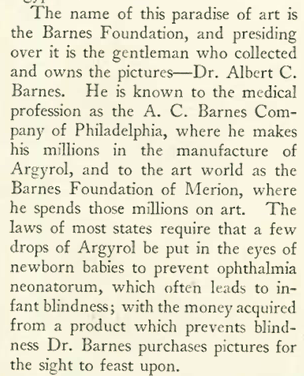 A One-eyed Monster Comes to Life

It’s always interesting to note the mentions of emerging technology in the early New Yorker, including this bit in Howard Brubaker’s column “Of All Things” about the successful broadcast of a “radio-television play.” Brubaker mused about what this new invention might called:

The first television broadcast in July 1928 was not exactly must-see TV. For two hours a day, General Electric’s experimental station W2XB broadcast the image of a 13-inch paper mache Felix the Cat, simply rotating on a turntable.

Then on September 11, 1928, W2XB (with WGY radio providing audio) broadcast a 40-minute one-act melodrama, The Queen’s Messenger. Northern State University’s Larry Wild writes that because TV screens were so small, only an actor’s face or hands could be shown. “The play had only two characters. A female Russian spy and a British Diplomatic Courier. Four actors were used. Two for the character’s faces, and two for their hands.”

Advertisers were always looking for clever angles to capture the attention of the New Yorker’s upscale readers, including the use of subtle and not-so-subtle racist cues to get their points across. Two examples from the Sept. 22 issue have the makers of Oshkosh trunks helpfully pointing out that their product is not intended for African “natives”… 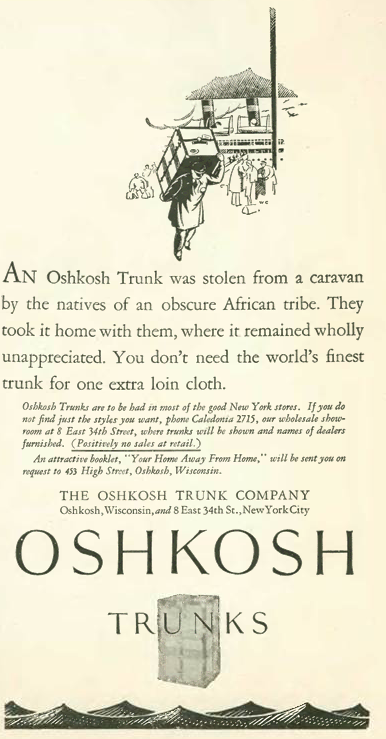 …or the folks from Longchamps restaurants, who depict the joyless life of a blubber-eating Eskimo as an appropriate juxtaposition to the succulent delicacies awaiting readers at their five New York locations:

We might associate rumble seats with the carefree joys of the Roaring Twenties, but in reality passengers in these jump seats received little protection from the elements (or flying gravel), and the ride was no doubt jarring atop the rear axle. No wonder you needed a special coat:

Our cartoons for Sept. 22 include this whimsy from Gardner Rea…

…and this cartoon by Al Frueh, which depicts the deserted surroundings of the Flatiron Building on Yom Kippur. Robert Mankoff, who served as the New Yorker’s cartoon editor from 1997 to 2017, observed in the Cartoon Desk (Sept. 26, 2012) that “the rapid growth of Jewish-owned businesses in New York made the cartoon relevant in a way that it’s not today. Through modern, politically correct eyes, the cartoon may seem anti-Semitic, but I don’t see it that way. It just depicts the reality of those times, exaggerated for comic effect.”

Next Time: The Tastemakers… 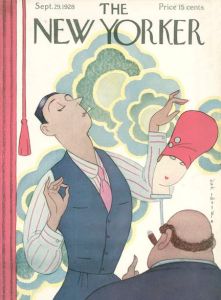 The January 8, 1927 issue of the New Yorker was all over the 27th Annual Motor Show at the Grand Central Palace, both in its lengthy review of the show and the many automobile ads throughout its pages.

Auto manufacturers discovered early on that cars didn’t need to advance technologically from year to year as long as there were superficial changes–trimmings and such–to dazzle the consumer: 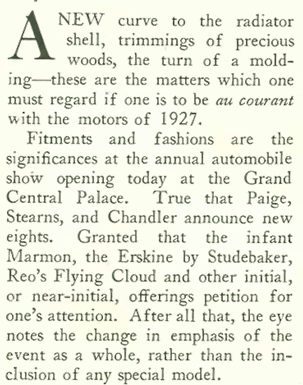 Advertisements in the New Yorker ranged from snobbish appeals to Francophiles…

…to those who might be concerned about safety. Although cars weren’t very fast, they were fast enough to kill, and their plentiful numbers often overwhelmed a city with rudimentary traffic control.

In his book, One Summer: America, 1927, Bill Bryson writes that New York in 1927 was the most congested city on earth. It contained more cars than the whole country of Germany, while at the same 50,000 horses (and wagons) still clogged the streets. More than a thousand people died in traffic accidents in the city in 1927, four times the number today.

Traffic control was still in its infancy in the 1920s. Seven ornate bronze towers, 23 feet high, were placed at intersections along Fifth Avenue from 14th to 57th Streets starting in 1922. By 1927 smaller, simpler lights were mounted on street corners and the system of green, yellow and red was generally adopted.

Keeping with the motorcar theme, the issue also featured a profile (written by Lurton Blassingame) of Walter P. Chrysler, founder of the new car company that bore his name (Chrysler founded his company in June 1925 after acquiring and reorganizing the old Maxwell Motor Company). In just three years a famous New York City landmark bearing his name would pierce the skyline.

I recently noted that the fall 1926 editions of the New Yorker barely mentioned baseball, even though the Yankees made it to the World Series that year. No doubt the Black Sox scandal of 1919 still lingered in the minds of many fans. Morris Markey’s “Reporter at Large” column in the Jan. 8, 1927 issue suggested that the game was still dishonest, thanks in part to its collusion with the newspapers:

Baseball might have been down and out, but actress Pola Negri still maintained her place in the spotlight with her latest film, Hotel Imperial. 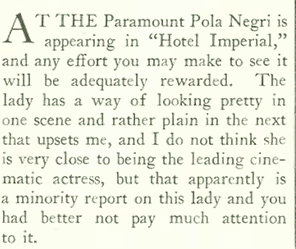