Broadway shows were a popular nightlife diversion for New York’s upper middle-class, but plays and musicals were only part of an evening’s entertainment. The city’s “after theatre” clubs beckoned those who enjoyed an evening of dance with the Astaires or a light comedy with Lunt and Fontanne, but believed the night was still young.

And who better to chronicle the late night revelry than Lois Long, who through her “Tables For Two” column (signed “Lipstick”) was a leading voice of after hours Manhattan and a nightly presence in its various clubs and speakeasies. Longtime New Yorker writer Brendan Gill (Here at the New Yorker) observed that Long, who joined the New Yorker in 1925, “had plunged at once, joyously, into a New York that seemed always at play — a city of speakeasies, night clubs, tea dances, football weekends, and steamers sailing at midnight.”

In May 1928 Long had been married for about nine months to colleague and cartoonist Peter Arno, who was also a regular fixture of the nightclub scene. But in Long’s column for May 5, 1928, one can detect a bit of weariness setting in, the 27-year-old sensing the next generation didn’t know how to have a good time.

And it didn’t help that the younger people were dancing to “canned music,” what with the spread of broadcast radio and improvements in phonograph records…

For those on the wilder side, Lois Long recommended a number of after-hours entertainments, including Texas Guinan’s latest all-night club, Salon Royal, and its snake-charming hootch dancer.

Because so many New Yorker readers were both theatre and after-theatre-goers, the magazine included some of the after-dinner destinations in its “Goings On About Town” section. Excerpts follow.

A May 5 “Talk of the Town” segment (written by James Thurber) commented on the challenges film crews faced when they shot on location in the city, in this case the production of Harold Lloyd’s latest comedy, Speedy: 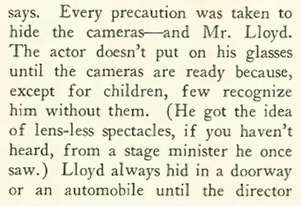 The actress Joan Crawford is best known today as the subject of the 1981 biopic, Mommie Dearest, which portrayed Crawford as an insecure, abusive parent to her adopted daughter Christina (the film was based on a 1978 memoir and exposé of the same name written by Christina Crawford).

But in the 1920s and 30s the former dancer and chorus girl was better known for her sex appeal, attractive to men for her looks and to women for the roles in which she portrayed hard-working women who find both romance and success.

The New Yorker took notice of Crawford in its review of Across to Singapore, the critic O.C. noting that Crawford “gets prettier in every picture”…

Another film released later in 1928, Our Dancing Daughters, would make Crawford a star and a symbol of the liberated, 1920s flapper. Even the writer F. Scott Fitzgerald would observe that “Joan Crawford is doubtless the best example of the flapper, the girl you see in smart night clubs, gowned to the apex of sophistication, toying iced glasses with a remote, faintly bitter expression, dancing deliciously, laughing a great deal, with wide, hurt eyes. Young things with a talent for living.”

Another actress with a talent for living was 34-year-old Mae West, who was appearing on Broadway in Diamond Lil. Already a 21-year veteran of the stage (she began performing in vaudeville in 1907 at age 14), West was known for writing and performing in risqué plays beginning in 1926, when she appeared in Sex, which was panned by conservative critics but enjoyed hot ticket sales.

Subsequent plays aroused controversy and kept her name in the newspapers, but her play Diamond Lil would become the Broadway hit that would cement her image as a sex symbol, one she would maintain until her death at age 87 in 1980. In the May 5 issue artist Miguel Covarrubias offered his vision of the Queen of the Bowery:

It’s interesting to see how 1920s advertisers made even the most mundane gadgets appear to be vital to one’s survival. The ad for the “Sesamee” auto switch lock is a case in point, appealing to upscale female readers of the New Yorker with this odd scenario in which the gadget enables the driver to avoid the awkward and potentially hazardous situation depicted below, although it hard to see what the actual threat might be from a dandy in a tie and waistcoat. Perhaps death from boredom.

Our cartoon is courtesy of Mary Petty,  who would become a renowned illustrator for the New Yorker, best remembered for a series of covers featuring her gentle satirization of the upper class Peabody family.