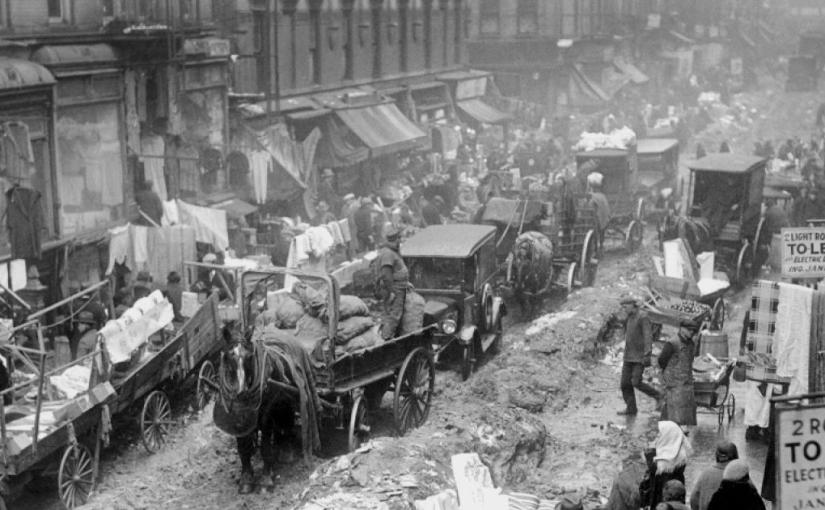 The month of February 1926 must have been miserable in New York City. A massive blizzard made a mess of the streets, which were then topped by a soot-laden smog. The smog was the result of homes and businesses burning soft coal, which produced far more smoke than the hard variety (which was in short supply).

The photo above, from the Daily News archive, shows a chaotic scene on Orchard Street (Manhattan’s Lower East Side) after the storm.

As could be expected, The New Yorker editors tried their best to make light of the situation, although they couldn’t resist making a racist remark regarding the effects of soot on the population. It is also interesting to note that the word “smoggy” was considered by the editors to be a relatively new term:

Al Frueh showed us how the toffs dealt with the situation…

In his “A Reporter at Large” column, Morris Markey scoffed at the hype and small-town boosterism that accompanied the young singer from rural Missouri:

Talley’s debut performance was as Gilda, the daughter of the title character in Giuseppe Verdi’s Rigoletto. The Metropolitan Opera’s general manager, Giulio Gatti-Casazza, hoped Talley’s debut would be low-key and not overshadow the production. However, a delegation of two hundred leading citizens of Kansas City, including the mayor, arrived via a special train for the event.

Adding to the chaos, a noisy telegraph machine was set up backstage so Talley’s father could send dispatches to the Associated Press.

Talley’s swift rise to fame would be followed by a relatively quick return to obscurity. After appearing in seven productions at the Met, her contract was not renewed for the 1929 season.

Next Time: Life of a Rum Runner…