Dorothy Parker turned her jaded eye to the latest big thing — talking pictures — and in the Sept. 1, 1928 issue she joined her New Yorker colleagues in a collective yawn at the technology that was dramatically transforming cinema.

In a feature titled “Out of the Silence,” Parker mused about the changes facing former silent stars…

…and seemed unconvinced that the talking pictures, at least to date, were any real improvement over the silents, including a performance by her Algonquin Round Table pal and New Yorker colleague Robert Benchley, who seemed but a talking simulacrum:

Parker attended a matinee at a jam-packed Warner Theatre, where folks paid a dollar apiece for standing room only to witness a series of shorts and a feature-length film, all presented with sound:

One of the shorts featured a performance by female impersonator George Francis Peduzzi, known professionally as Karyl Norman, “The Creole Fashion Plate,” followed by a performance from violinist Albert Spaulding:

What Parker was subjecting herself to was the Vitaphone Varieties, described by North Carolina Museum of Art film curator Laura Boyes as “the last gasps of vaudeville.”

Boyes writes that many vaudevillians stepped off the stage to immortalize their acts on film in the early days of the talkies. They were produced in Brooklyn between 1927 and 1929 using the Vitaphone method (large recorded discs synchronized with the film) “at a time when the major studios hoped that the talkies were just a passing fad.” She notes that “talkies would eventually put this style of theater completely out of business, and Vitaphone shorts literally became the place where Vaudeville went to die. Many of the people in these short films were obscure at the time, and they are doubly obscure now.”

As for the main feature, The Terror, the only terror Parker felt was the fear of being bored to death:

Parker concluded that “talking pictures are marvels of invention,” but “a bad show is a bad show, synchronize it how you will.”

Coming of Age in Samoa

Social critic and humorist Baird Leonard took the honors as book reviewer for the Sept. 1 issue, offering a brief, humorous endorsement of Margaret Mead’s landmark Coming of Age in Samoa, in which the famed anthropologist explored the link between culture and psychosexual development among the island’s adolescents. Leonard found much to like about the book, and particularly Mead’s observations on the separation of youth from adult activities in Samoan culture (it would enhance his bridge-playing enjoyment): 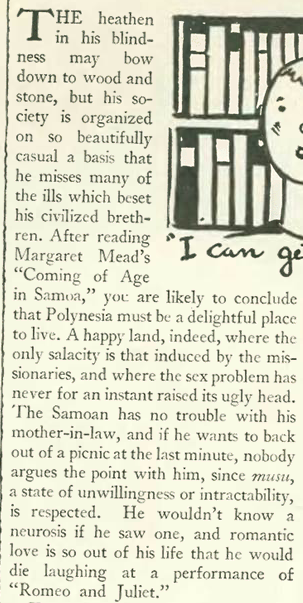 Writer Cameron Rogers profiled American sculptor Paul Manship, who was an important contributor to Art Deco style, and is perhaps best known for his iconic Prometheus sculpture at Rockefeller Center in New York. Rogers made these closing observations about Manship, noting that the artist’s success netted him about $60,000 a year — close to $850,000 today (These days, someone like showman/artist Jeff Koons, who makes giant shiny balloon animal sculptures, among other things, has a net worth of at least $100 million).

I find it interesting when one magazine advertises in another, especially when an older magazine like the Outlook (founded in 1893) advertises in an upstart like the New Yorker. But then again, the publishers of the Outlook were looking to breathe new life into their stodgy journal, and what better way than to announce that their “conservative girl” was now a modern, grown-up woman with a new Jazz Age look and an attitude to match. And it was no coincidence that they hired the New Yorker’s Rea Irvin to illustrate their point. 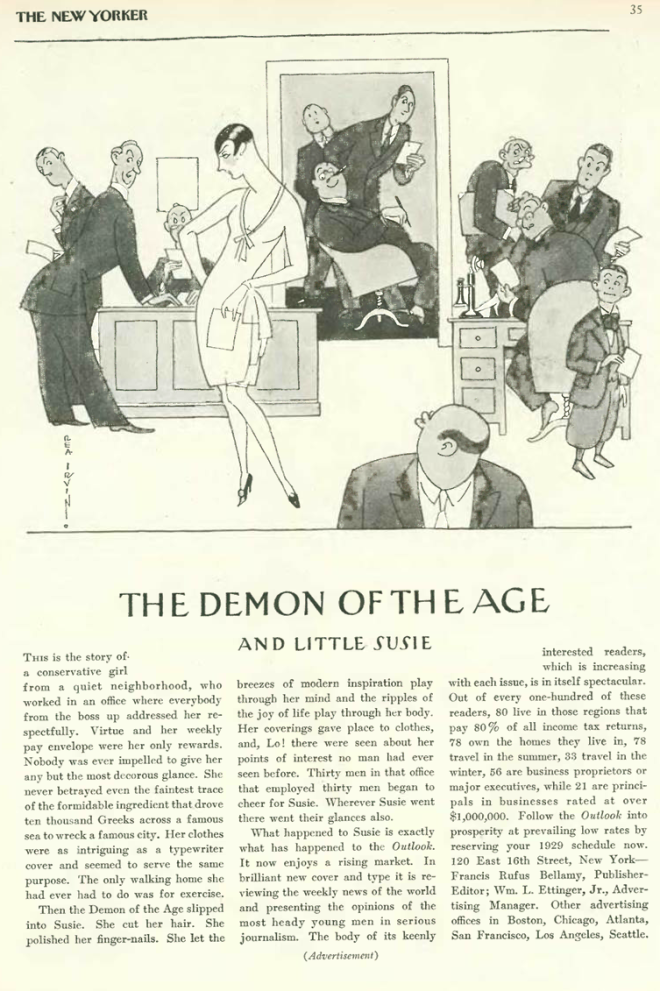 Our cartoon is by Peter Arno, who continued to explore the lighter moments of New York night life…