Ring Lardner is one of those 20th century American writers everyone has heard of but few have actually read. This is perhaps because he is often pigeonholed as a sportswriter rather than being remembered as a gifted satirist whose crisp writing style—often peppered with slang—influenced a generation of writers including Ernest Hemingway, who covered sports for his high school newspaper under the pseudonym “Ring Lardner.”

Lardner would contribute nearly two dozen pieces to the New Yorker beginning with this ditty in the April 18, 1925 issue—

—and ending with “Odd’s Bodkins,” published posthumously in the Oct. 7, 1933 issue (Lardner died at age 48 of a heart ailment on Sept. 25, 1933). In his satirical “Profiles” piece for the July 7, 1928 issue, Lardner had some fun with editor and playwright Beatrice Kaufman, who like Lardner existed within the orbit of the famed Algonquin Round Table but was not a regular member (however Beatrice’s husband, playwright and director George S. Kaufman, was a charter member).

The entire piece, including an illustration by Peter Arno, is below (click image to enlarge the text):

One New Yorker writer who does stand the test of time is E.B. White, known to earlier generations for his many humorous contributions to the New Yorker and to later generations for his co-authorship of the English language reference The Elements of Style, and for his beloved children’s books including Stuart Little and Charlotte’s Web (Charlotte’s Web was often voted as the top children’s novel in a survey of School Library Journal readers, and most recently in 2012—the 60th anniversary of its publication). In the July 7, 1928 issue the nature-loving White offered these tongue-in-cheek plant care instructions, arranged atop a cartoon by Alan Dunn:

Another cartoon in the July 7 issue by Garrett Price offered another perspective on an advertising come-on:

No doubt Price was referencing ads such as this one below by the American Tobacco Company in which actress and dancer Gilda Gray—who in the 1920s popularized a dance called the “shimmy”—announced her preference for pipe smokers:

And we close with this cartoon by Al Frueh, who demonstrated how fashion had freed the woman of the Roaring Twenties:

A couple of my favorite Maslin cartoons (among many): 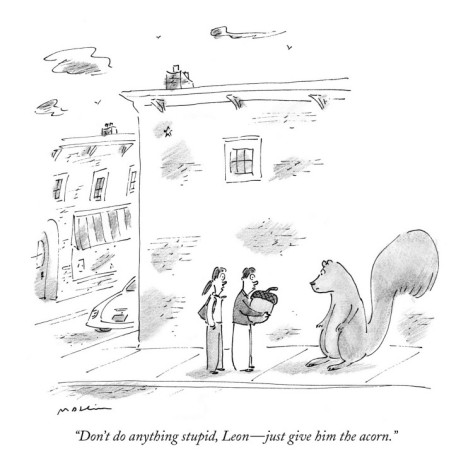 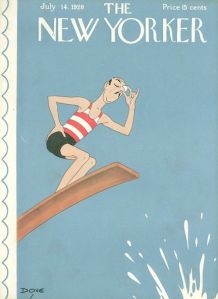 2 thoughts on “A Familiar Ring”