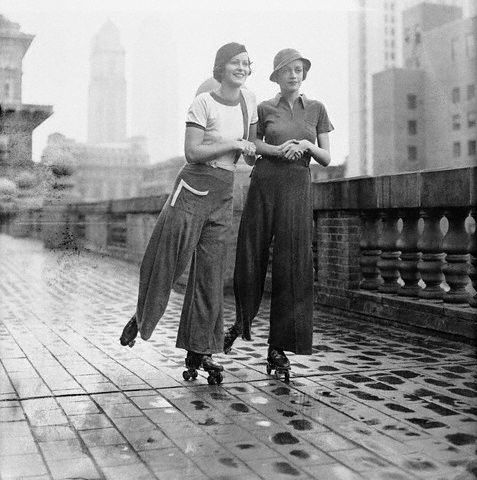 The dog days of summer were ushered in by the news that “the buyers” had “invaded” the city.

The “buyers” in question were tourists (and no doubt some clothing store merchants) from across the country who had descended upon Gotham in search of the latest fashions that could be bundled off to the hinterlands.

“The Talk of the Town,” speaking through the fictional persona “Van Bibber III,” took a sneering view of this annual migration:

In the first issues of The New Yorker, the “Van Bibber III” signature appeared occasionally at the end of “Talk” or other items.

In her book, Defining New Yorker Humor, Judith Yaross Lee wrote that early readers of The New Yorker would have recognized the Van Bibber III persona “as a joke, a personification of Van Bibber cigarettes, whose ads targeted the devil-may-care, swagger young man about town all dressed up for the opening night. As an insiders view of the urban scene, Van Bibber’s accounts featured casual conversation—that is, talk.”

“Of All Things” offered this update on the activities of illusionist Harry Houdini:

Houdini, charged with disorderly conduct after smashing up an office, replied: They locked the door and I had to fight my way out.” Bang goes another illusion! We thought he could open anything but a car window.

Murdock Pemberton wrote about the life of poet Harry Kemp in “Profiles,” and cartoonist Al Frueh offered this twist on the uses of “hot air:”

And more art from Ralph Barton, this time along with his views on the play Artists and Models and the contrasts between life in New York and Paris:

“Moving Pictures” offered praise for Sally of the Sawdust, featuring W.C. Fields. Theodore Shane wrote that Fields had distinguished himself from other movie comedians through his act as a “snooty sort of superclown.”

The tennis tournament at Seabright featuring Elizabeth Ryan and Helen Wills was the subject of “Sports of the Week,” and in “When Nights Are Bold,” Lois Long continued her look at nighttime entertainment venues to beat the summer heat: 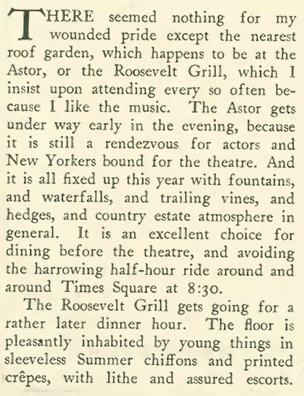 Advertising remained sparse in the pages of The New Yorker, with both inside front and inside back covers devoted to in-house ads promoting the magazine. In addition, the color back cover was also a house ad, featuring a rendering by H. O. Hofman:

Next time. Will The New Yorker sink or swim?