Ralph Barton’s “The Graphic Section” in the August 15, 1925 edition of The New Yorker gave readers their first whiff of one of the sensational scandals of the Roaring Twenties. Barton reported that wealthy, middle-aged bachelor Edward Browning (then 51 years old) wanted to “adopt” a “sixteen-year-old cutie for his very own.”

What Barton referenced in his comic illustration foreshadowed the “Peaches” scandal that would occur the following year.

According to an April 1, 2012 article by Dan Lee in New York Magazine (titled with the subhead, “She was 16, he was 52, what could go wrong?”), Browning was well known in New York City “as perhaps the most idiosyncratic of the city’s eligible bachelors…worth what would now be an estimated $300 million.”

Lee writes that Browning was already a tabloid fixture at age 40 when he married his first wife, Adele, a considerably younger file clerk. They adopted two daughters, Marjorie and “little Dorothy Sunshine,” Browning’s favorite. When Adele left him for a “28-year-old playboy dentist,” they split the girls between them. Browning, of course, chose “Sunshine,” and vowed never to marry again. Lee takes it from there:

In what the tabloids quickly helped morph into a Willy Wonka–style lottery, Daddy set about finding a sister for Sunshine: After personally reviewing 12,000 applications and interviewing scores of would-be daughters, he chose Mary Louise Spas of Queens, who, despite being 16 and therefore two years older than the cutoff, bore a charming gold tooth and stole his heart. A My Fair Lady transformation ensued, rapturously reported by the press, which continued trolling Spas’s past, ultimately uncovering revealing swimsuit photos that led to school records that led to the disclosure that Mary was actually 21 and not poor. Daddy moved to have the adoption annulled. Mary responded with a tabloid tell-all and lawsuit, alleging Daddy was a pervert.

According to Lee, Browning then turned his attention to charity, “especially for a local chapter of the Phi Lambda Tau social sorority for high-school girls, of which he was the main benefactor.” Lee continues:

The sorority’s primary function was throwing dances across Manhattan for girls in scanty flapper dress, where Daddy, with his long, sagging face and steep W-collared dress shirts, smoked cigars and held court. And so it went that one night, inside the ballroom of the Hotel McAlpin on 34th and Broadway, Browning’s life intersected with Frances Heenan’s, whom the press would describe as a “chubby,” strawberry-blonde high-school dropout with “piano legs” but an inexplicably “magnetic” smile who worked as a shop clerk and lived with her single mother in Washington Heights. He likened her to peaches and cream, securing her lifelong nickname. Thirty-seven days later to thwart a child-protective-services investigation, they were married.

The wedding took place on June 23, 1926, Peaches’ 16th birthday, but later that year, Peaches would seek a divorce.

The divorce trial in White Plains, New York drew intense coverage by the tabloids including Bernarr McFadden’s notorious New York Graphic, which published “composographs” of the couple, including this one:

The story was featured in newspapers across the country, including reports of Peaches’ testimony regarding her husband’s odd sexual behavior and the fact that he kept an African goose in their bedroom. According to Wikipedia, the phrase “Don’t be a goof,” which Browning allegedly used to insult Peaches, came into national vogue, and later turned up in the lyrics of the song “On Your Toes,” by Rodgers and Hart.

In the end, the judge ruled that Peaches had abandoned her husband without cause, and released Browning from the marriage. She was however awarded a $6,000 “widow’s portion” when Browning died in 1934.

According to Lee, Peaches pursued a successful career in vaudeville, “had an affair with Milton Berle,” would marry and divorce three more times, and would become an alcoholic. On August 23, 1956, her mother heard a crashing sound in the bathroom of their New York City apartment and found Peaches unconscious with a large contusion above her ear. She was dead at 46.

If you want to read more about this strange coupling, Michael Greenburg has written a book, Peaches and Daddy: A Story of the Roaring 20s, the Birth of Tabloid Media, and the Courtship that Captured the Hearts and Imaginations of the American Public.

And so on to the rest of the issue…

“Profiles” featured Theodore Dreiser, whom Waldo “Search-light” Frank dubbed “the martyr of the American Novel” and a “heroic warrior against legions of a commercial and Puritan world.”

“The Talk of the Town” offered this postscript on the “Scopes Monkey Trial,” observing that the small Tennessee town was suffering a bit of hangover (and attendant humiliation) from all of the trial publicity:

“Sports of the Week” covered the annual “Dog Show of the Consolidated Hamptons,” featuring illustrations by Johan Bull: 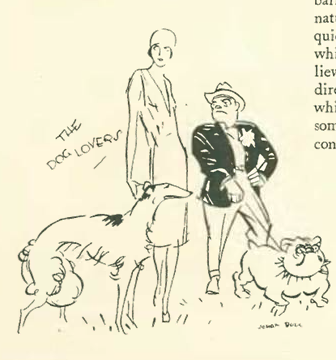 In her column, “When Nights Are Bold,” Lois Long offered the Montmartre as a venue for summer entertaining:

“Moving Pictures” peered between fingers at Tod Browning’s latest picture, The Unholy Three (Yes, that’s the same Tod Browning who would go on to direct Dracula with Bela Lugosi in 1931 and the creepy 1932 cult classic, Freaks):

Next time, more horseplay, and another jab at the mayor: 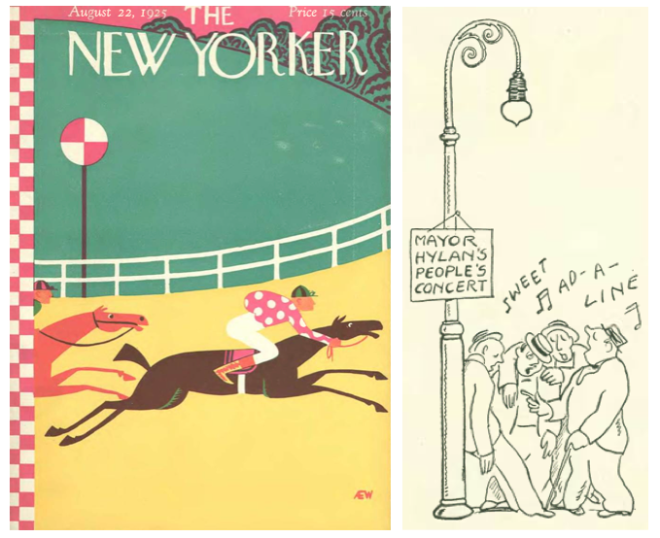 One thought on “A Peach of a Scandal”